This is the twelfth Adventure Log in an ongoing series about Earthdawn.Introduction and Index.

The Grim Legion has always been an element that I cannot help but introduce into every Earthdawn game in some fashion or another. Each time I make them different, particularly with regard to what is printed, just to keep them mysterious and interesting. But mostly mysterious. This particular game is no different on all accounts.

I'm going to keep the specifics of what they are up to here under wraps because it is a major theme that I have been slowly working on. Also a significant source of questions that have no answers, and I very much enjoy watching that particular player struggle with puzzles when he knows he doesn't have all of the pieces, but still tries to fit things together. The various puzzles I have given him over the years could fill a blog.

In this particular game, the Grim Legion has significantly less presence over Barsaive as a whole. They tend to operate in smaller groups, some with a complex version of a Group Pattern that is tied to a greater Group Pattern. The nature of how that works is a closely guarded secret. Their primary function is still to hunt Horrors across Barsaive, complete with a healthy side of moral ambiguity - the ends justify the means. 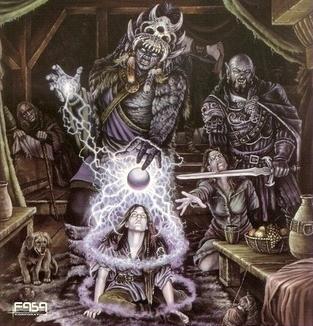 There is no doubt that they had done good by eliminating threats, not just Horrors, but at the same time, they have little regard for those that are hurt along the way. In their minds, they simply would have been victims regardless and if the Legionnaires are willing to give their lives to protect the people of Barsaive, then the people of Barsaive should be willing to give their lives as well. This also extends to taking the resources that they need - if it were not for their actions, there would be no one to produce these resources.

Not all of the Grim Legion are quite so callous, some are generous with all that they have, taking their Oaths very seriously (the nature of these Oaths is a closely guarded secret). Others may seem to be little better than criminals, but even they are still driven towards the overall goal. Ultimately, each Group is semi-autonomous and operates in a fashion they see fit, even if directed by a central authority.

While all of their efforts seem to be directed at eliminated Horrors, a task which they are incredibly effective at, there are indications that they may have other goals they are slowly working towards. Not all of their activities seem to be motivated by Horrors and their many Nethermancers have a great deal of interest in some of the research conducted in Wyrm Wood during the Scourge. 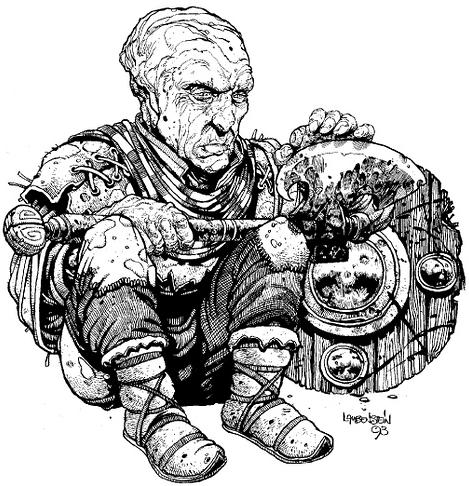 New Year’s party time! Elmod and Sogun start off the new training. Ontheros has returned to Bartertown on his hunt for Horror tainted items that may be showing up during the festival(1). I have started training Thistle(2) so that he can fully embrace the ways of the Windmaster. Bartertown is being occupied by a number of different mercenary groups and Sogun has been hired by the Fist of Thystonius(3) to uncover information about the other mercenary groups. Ting has been approached by Tarr, who offered her a chance to do what she does best: create mayhem, and rob a drug den that is a plight on the city. The catch is that she can’t cause casualties(4); I’m not sure if she can do that. Elmod and I were both requested at different times to meet a mysterious figure at the Juggling Shadowmant where we too were offered positions to assist in the robbing of the drug den. Ontheros and Jak go out to help Maguk(5) (world’s largest troll) with other things happening around the city.

Heist night! We were given this creepy grease paint stuff to put on our eyes (ewww). It turns your eyes black and then allows you to see in the dark(6)! I’ve never been able to see in the dark before, it’s so exciting. With much flourish Ting and some thugs burst onto the scene and successfully rob the building of money and drugs. At the same time, Sogun said he had to deliver a message to the head of the consortium that happened to be dining with Maester Bleys. Jak and Ontheros were heroes that night and saved people from the burning building. Maguk and the rest of the patrol took care of heckling Swordmasters who were accusing the patrol of starting the fire (the nerve of them)(7).

Given some time to look at the drugs that Ting stole, Elmod and Ontheros discovered that they were Horror tainted! This drug is called krokodil(8) and it super icky. This had been the last drug house in the area and people had begun making this stuff on their own. Maester Bleys has charged us with finding whoever is teaching people how to make this junk(9).

I continue my mission to capture messages written in or’zet code. Elmod finishes his training and is kidnapped by goons that want to know about his mentor. Have no fear! We are able to rescue Elmod before any real harm is done to him.(10)

Elmod uses his scary magic to talk to the spirit of an ork that died because he was using the drugs and we found that Margin, a curio shop owner, is the one that is selling the drugs and teaching people how to make them.

Plan time! We need to get Margin to reveal that he is the one involved with the drugs. Jak and Elmod volunteer to go in and use the code word to get Margin to sell some drugs. Without much fuss Margin is captured and turned over to the authorities(11) in Bartertown. With Margin gone, Ontheros says that there are Horror tainted items in his shop. So in a style that is uniquely us we break everything in sight and find some Horror tainted coins that need to be destroyed(12).(13)

(1) The festival is a New Year tradition that Maester Bleys organizes as a martial counterpoint to the artisan festival that happens half a year from then. It's a lot more fun than most of the dwarfs will admit. Also, many orks that are easy on the eyes.
(2) Thistle the "Prickly" is associated with Adventuring Groups: Miscellaneous: The Briars; I wish I was making this up.
(3) Mercenary group, veterans and adepts, making a Name for themselves and particularly belligerent. Competent and whatever they lack in competence is compensated with aggression; though they are not as good as they think.
(4) That is an interesting insight into Tarr - warrants further investigation.
(5) A member of Maester Bley's mercenary Group/police force; see entry cataloged under: Adventuring Groups: Miscellaneous: Mismatched Steel - 004.
(6) Investigate what this "creepy grease paint" is.
(7) And now we know the origin of that incident.
(8) We've been getting a spotty reports of this stuff from around the province. We need to know more; it sounds like very bad news.
(9) For all of his issues, Maester Bleys has cracked down on drugs in Bartertown recently.
(10) What is this all about?
(11) This word should be in quotes.
(12) This is very bad news. We need to get control of that cesspool outside the gates.
(13) Received and edited by Ela Pono.

Overall, this session went very well - at least from where I sat. There was a lot going on and this adventure log only touches on quite a bit of it. To be perfectly fair, it would be difficult to record everything in detail and play at the same time. Also, some of the important details may not have seemed like it at the time. Many seeds planted long ago started to bear fruit and others were planted.

In the background of what was "really" going on was a festival to introduce some characters and color into the world. Part of it was to get people invested a little more in what was going on and make things seem more vibrant. Also to show that there is always a bigger fish (this was not directed at the players) - particularly in the form of a obsidiman Warrior brotherhood, The Immortals.

One of the major events was the escalation of conflict between the two groups vying for control of Bartertown. The players have thrown their lot in behind one of the factions, but are starting to find out some of the reasons they have been obliquely warned about him. His dedication to the community is absolute, but in a "ends justify the means" way.

The robbery on the drug den involved all of the characters in some capacity, which worked well. It was also a flash point for relationships within the Group: characters began to realize what exactly they were getting themselves into. It was also something of a setup: the entire thing went sideways, an opium den burned, many died within it and it was something of a PR fiasco. One side got to be the hero and the other was blamed for causing it.

That was just the beginning of some the dark places that events were starting to explore. During the robbery, they stole some opium suspended in alcohol. While investigating, they gave some of that to a junkie for information. By gave, I mean administered because he was going through withdrawal and suffering from burns. It was a very intense scene at the table. The ends justified the means.


During all of this, a plot that has been at the edge of things forces itself to the forefront: that one of the characters (Elmod) may be involved with Horrors in some fashion he does not understand. The goons are the Grim Legion and this was a chance to rebuild some Group cohesion that had been fraying. Everyone came to Elmod's rescue and he also go a chance to show off a little. After a series of body blows, this was a victory they could rally around, even if it involved one of their number abducted and tortured.

The drugs introduced in this session are part of a much larger plot that was put into motion much earlier. It is part the complete banal horrors of life that normal Namegivers inflict on themselves and there is no panacea for, and part the insidious way that Horrors can insinuate their influence into society completely undetected.
Posted by Morgan Weeks at 03:36