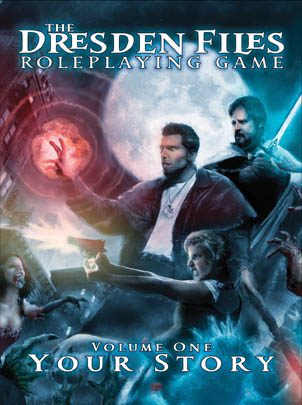 This is the first part in a series about the Dresden Files Role Playing Game. Part 2 and Part 3.

A good friend is in the area to visit family and friends. To celebrate his return, I offered to run a game for him, his wife, and other local friends. Any game he wanted. Well, there are a lot of options, but he has never played a FATE game. So a one shot using the Dresden Files RPG was the winner.

In my planning for this game, I decided to do all of the prep work myself. This includes making the city and the characters. While this decision can take a lot of what is great about the collaborative city and character creation out of the picture, given the time constraint (one session), there couldn't be the time devoted to that activity to make it worth it, nor would there be the same payoff in the end from that investment. Additionally, I could ensure that the characters presented show some different aspects (hah!) of FATE, provide niche protection, and not run afoul of anything that would slow game play to a crawl (magic, I am looking at you).

The city is Portland, Oregon, March 2010, in a setting that is loosely inspired by the Dresden Files. My intended audience isn't incredibly familiar with the novels, so relying on the details from that would have little payoff and more likely prove frustrating for those not as familiar with the source material. This is good because it also allows me to change some of the underlying assumptions and ultimately remove the magic system. While wizards are integral to the Dresden Files setting and one of the more innovative pieces to the system, they require a significant degree of system mastery to make work and I would rather keep the game moving than continually stop to address how to use the powers.

Beyond just magic, there are a number of setting elements I intend to play around with, and will likely address them in a future post. For example the Nevernever. While I like it as presented, I'm going to try it more as a reflection of the cognitive memory of humanity and the world with different levels. At the layer closest to the world, it is a reflection of the world that remembers what once was. Perhaps old buildings that are no more still exist, you just have to shift a little deeper. The further you get, the stranger things are and the more primal the expressions are. Hopefully more on that later.

Each of the players was asked for a summary of what kind of character they would like to play. From there, I did all of the heavy lifting and putting the pieces together. While putting a character together may be a snap for some, I've seen players struggle with the options and particularly Aspects. Writing good Aspects is not an easy task and I will make no claims at being good at it. As I mentioned above, making each of the characters means that I can tailor certain events to bring them together and ensure that they will have something to do.

The first two characters that I got proposals for were a gargoyle and a Kenzi-expy. For the former we chatted a little bit and used the idea of a gargoyle timelessly perched on and guarding a building for inspiration. The latter was pretty straight-forward and well supported with the system.

I'm trying to give an implied background that the player can fill in the details from. The goal here was to create a supernatural investigator that has been pulled through time and moved from city to city. Whatever city he would call home, he would be a part of it and unable to leave. Waking when needed and returning to sleep. Over time their number dwindling. He would also be a powerhouse, able to change into a stone wrecking machine when needed.

Again, I was trying to give an implied background and letting the player decide what this all actually means. My biggest goal here was to give some very useful Aspects since that is a mortal's primary advantage - Fate Points. She has some good stunts and maintains a reasonable Refresh of 4.
Posted by Morgan Weeks at 02:35