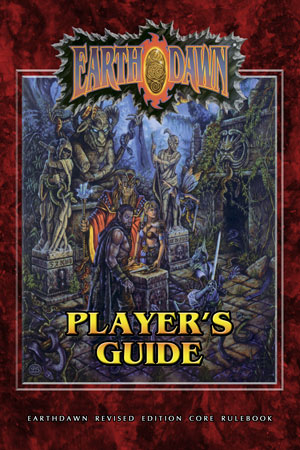 This is part two of the twenty-ninth Anatomy of a Discipline in an ongoing series about Earthdawn. Introduction and Index.

On the surface, the Illusionist appears as a charlatan out to deceive the unwary, and take advantage of the blind. In reality, this is almost entirely true, though they will take deep offense to being called a charlatan. You don't really want to offend an Illusionist - they can make your life very uncomfortable.

Illusionists view those activities as a sacred duty, an obligation to those around them. They certainly delight and entertain with their displays, but there is always something else at work. Through all of this, their goal is to teach. To help those around them better understand the fundamental differences between truth and lies.

These adepts view the world as a dangerous place, full of the unscrupulous that are more than willing to take advantage of those around them. In a best case scenario, they are a petty crook and not much damage is caused, though the victim will become hardened to the world. Even worse, they can be left destitute by a heartless conman. At the worst, they can come under the sway of a Horror. The protection of their fellow Namegivers is what motivates these spellcasters. If they do not help others to learn the critical thinking necessary to see beyond these illusions, they may become a victim in the worst kind of way.

In the interest of better understanding the nature of truth and lies, Illusionists travel to see the world, explore new things, and have new experiences. Expanding their horizons is the only way that they can better grasp what it means to be true or false. This is fundamentally important, though not commonly discussed. In general, Illusionists prefer to maintain the facade that they have perfect clarity in such matters. Astute students will suspect otherwise, and those so duped may be fleeced for a few coins for their trouble. The lesson must hurt a little to be learned, after all, and it is far kinder to cause a little pain now and prevent grievous injury later; right?

They don't have much in the way of traditions, even handed down from mentor to student. These adepts tend to be spontaneous and adaptable, since rote repetition is simple to outmaneuver and teaches little about truth. Simply how to do exactly as those who came before you did. When playing an Illusionist, consider that, but also how they prefer to go about things. Is there imagery or tales that they particularly enjoy? Have they learned any painful lessons that brought them on this path? How much of their history that is shared is truth and how much is a lie? These are best employed not as a stick, but as a chance for the player to take a deeper look at what it means to follow their Discipline. Like most Disciplines, there are a few ways that an Illusionist can run afoul of their own way of life. The simplest is by relying on non-illusion ("real") magic too often, though the same can be said of relying exclusively on illusion magic as well. Given that an Illusionist is dedicated to understanding how to recognize the space between the two, they must practice both regularly.

A beguiling violation is the hubris of assuming that you recognize truth and lies in all things. To accept anything at face value is dangerous and goes against the ethos of the Illusionist. Along similar lines is approaching a problem in a straight-forward fashion. It goes against the way these adepts work - by facing it head on, you will never see behind the curtain and find the truth.

The final potential violation is experiencing new things. Illusionists must always seek out new sensations and experiencing then in new ways. They need to find truth and lies. To create a better lie and to know the truth, they must have a broader set of experiences. You cannot craft a convincing illusion about something you have never seen or felt, and it becomes significantly more difficult to see the truth behind something you do not understand.

The majority of their Discipline Talents are based around deception in some fashion, whether directly (Disguise Self, Dead Fall, Fast Hand and Power Mask), by improving their illusions (False Sight), or defeating other illusions (True Sight). They have the good access to social Talents in general, mostly through their Talent Options, though Speak Language supports that and Engaging Banter is on the fence between a deception-oriented Talent and a social Talent.

Combat is by far the biggest weakness for this Discipline. These adepts don't get any Discipline Talents or Talent Options that are combat oriented. Even their spells often fall short in a direct confrontation. Which isn't to say that they cannot contribute, they have some good spells available, simply that their most effective contributions are unlikely to be through a direct application of force. That's simply not their style.

What is their style is approaching problems laterally. They have a strange toolbox at their disposal, all of it favoring an indirect approach. Playing an Illusionist is similar to staring at a round hole with a bunch of different tools that may, or may not, be useful, but the odds are good if you come at it in the right way, with the right pieces, your square peg is going to fit. It is pretty much their job to change the shape of the game and how it is occurring. This is not an easy job, but it sure can be a lot of fun.

In a combat intensive game, which features more wilderness and abandoned kaers than civilization, this is unlikely to be a good fit. There are going to be enough circumstances where all of the tricks are your disposal will be for naught. If your game features interaction and espionage (especially that), then the Illusionist is going to shine. The archetypal "balanced" game between the various elements (exploration, combat, diplomacy, espionage, etc) is going to test all of these adepts' abilities and be rewarding for someone up to the challenge.

When it comes to the Initiate Talent Options, there is a tragedy to be had: there is only one answer, but there are a number of good choices. Specifically, Spell Matrix is the answer. The odds that you come back here at Novice are nearly a certainty.

The Novice tier Talent Options are something of a mixed bag, which just means there will be more opportunities to slip back into Initiate:
Fifth Circle, when you first get to Journeyman, is going to have the most agonizing choice you may ever have to make - especially when looking at Talent Options. Which do you get first, Enhanced Matrix or Willforce? Beyond that, there are some other good Talent Options here as well, but even then one rises above the others.
Spells

Like every magician, their spells are what they are really about. The Illusionist spell list is one of the most difficult and rewarding to master. While primarily illusions (and being excellent at them with False Sight), they have a significant number of spells that affect the mind, or provide other, stranger effects that could prove useful in the right circumstances.

Which is really what their spells are about: having just the effect to solve a problem in a very strange fashion. Getting to know your spells inside and out is going to be vital to success, also always be on the lookout for the spells you don't have that could be useful.

There is a lot to like about the Illusionist spells; it is probably the most thematic list of spells out there, truly making an Illusionist feel different than a wizard with more illusions than normal. They go about solving problems differently than any other Discipline not because they choose to, but because those are the options available to them.

A fair warning: you will naturally be bringing out the Sensing and Disbelief rules and learning them well. They are likely to be a little cumbersome at first, but once they become familiar things will go more smoothly (it's not like grappling or anything).

Elves, humans and windlings tend to bring the most (mechanically) to a Illusionist (as well as my house-ruled dwarfs). Elves have a bonus to Perception and Willpower, by far and away the two most important attributes. Humans have Versatility; they can be good at anything. Windlings get a bonus to Perception, increased physical defense, flight, Astral Sight and their penalties to strength and size are pretty much meaningless.

What the other Namegivers have to offer isn't of much use to a Wizard. Dwarfs get a bonus to Strength. Orks get the same, but also a penalty to Willpower. The benefits that both obsidimen and trolls get (increased size, Strength) are of little use to a Nethermancer, and each get a penalty to Perception. T'skrang don't have any penalties, but their bonuses aren't extremely helpful and a Wizard has no real need for Tail Combat.

While these can be effective Wizard (these differences start to become less meaningful as you advance in Circle), it is important to be well informed about your decision. This pretty much goes for everything.