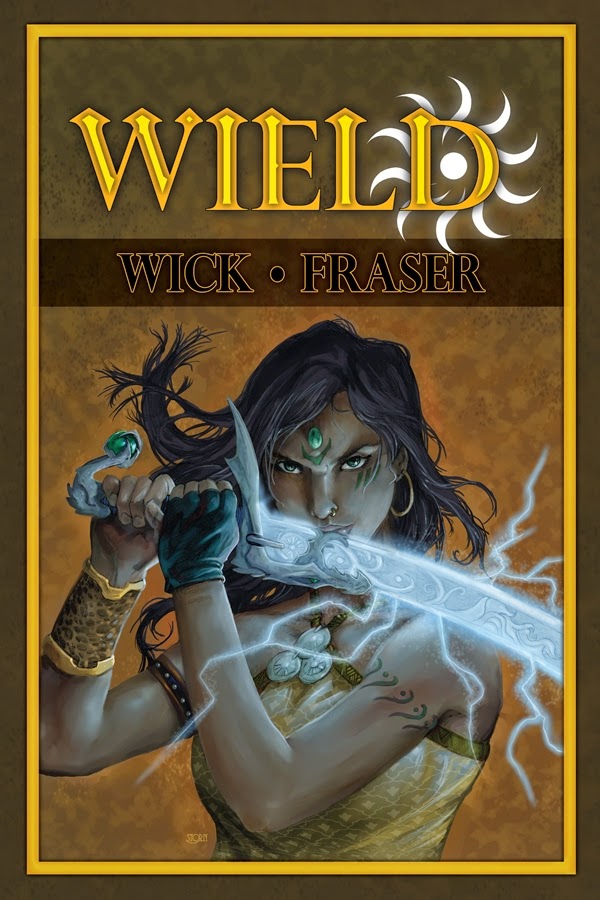 Wield, by Gillian Fraser and John Wick of John Wick Presents, is a game where the heroes of the story are not the people, but the items which use them.

Given the authors, it should come as no surprise the premise of this game turns a classic fantasy trope and turns it upside down. Each player has two characters they control, one is a "hero" who has come into the possession of an intelligent (and presumably ancient) magical item. The other is their actual character, the intelligent magical item. It a setup Wraith players will find familiar, the mortal and item pairings are controlled by different players, and each has their own agenda.

While it may seem like this is something of an arrangement between equals, it is not. The items (called vatcha, in a nod to one of Wick's recent games, Houses of the Blooded) start off holding all of the cards. They only begin to give up complete control of the relationship when their hero needs the item's powers. The more powers the vatcha gives to the hero wielding them, the less control they have.

Creating vatcha is a simple process. Each has:

The heroes are all created by the GM (referred to as Fate). This helps to remove any real connection between players and a particular hero. While it may not always be true, to many vatcha heroes are simply a disposable means to an end. The system does a good job (perhaps too good at times) of reinforcing this notion and it plays into the control dynamic.

Creating heroes is also an easy task. Which is good, because there will need to be a stack of them. Each has:
Whenever you (the player) get a hero, you add a personality trait to it. This is relevant, because then one dies, all of the surviving heroes (and the new guy) get shuffled and redistributed. All of this works towards the setup where there aren't likely to be any strong connections between a player and their hero. There are some concessions in the text for either the GM playing all of the heroes, taking the basic premise to its extreme, or keeping heroes with one player and making them tougher - allowing a for more of a "true" relationship to build.

The system for vatcha powers, like pretty much everything in the game, is simple and straightforward. Each domain has ten powers, measured from ranks 1 to 10 and getting progressively more powerful. They are described with their effect and how they work in combat (note: some powers clearly are not meant to be used in combat). Giving a hero access to a particular power - it simply happens and they can use it. There is a catch: as mentioned above, the more power the vatcha gives to the hero, the more control it gives up and the more the hero learns about the vatcha. This includes eventually how to destroy it.

Whenever the vatcha wants to force the hero to take a certain course of action, they test their control versus the hero's control. Winner gets to do what they want. This creates an interesting system of carefully doling out power to the hero, giving them only what they need to complete your goals while keeping them on as tight of a leash as possible.

There are a couple of problems, which are not insurmountable. The first is with the powers - not all are created equal. In particular, Creation 10 allows you do do absolutely anything, but the hero dies and doesn't come back. As a vatcha, who cares? Even giving the hero just the one power, even rank 10, still gives the vatcha 6 control to the hero's 4, meaning the vatcha has the edge in forcing this to happen.

The second has to do with opposition. While this isn't an PvP game, there is a certain expectation the various vatcha will be working at cross purposes at times, leading to conflict. If all of the players play nice with each other, there needs to be credible opposition against them. Within the context of the game, this probably means other vatcha. The idea of bringing NPC vatcha into the game isn't actually discussed.

In the end, this is a fun game which should give a unique experience for everyone. The setup means it can easily be played in a single session, or over the course of a few games. If you are looking for something with low commitment and offers something different, this is definitely worth giving a second look.
Posted by Morgan Weeks at 03:00