This is the third Adventure Log in an ongoing series about Earthdawn. Introduction and Index .

The Forge is important to the fabric of society within Barsaive. It forms the hub of many communities throughout the province, figuratively and literally. The presence of a Forge provides a sense of security and stability by means of what they represent and what they offer. The services of a Weaponsmith are more than just metal crafts; they often take the role of a civic leader. The nature of their Discipline is to seek continuity, harmony and tradition within their communities. Combined with a forthright nature, lack of guile, and tendency to ponderously think over matters, and it is natural that they would be a pillar of local governance.

Travelling Weaponsmiths will stop at the local Forge (or one of them, if there are many) upon arrival to a new town. Through that forum they can gain at least temporary acceptance and a sense of place, things that are often lacking in the life of an adventuring Weaponsmith. During their stay, it is not uncommon to offer their skills to the Forge, and community in general, in exchange for access to the facilities for their own purposes. Compensation may, or may not, be offered for the travelling Weaponsmith's services depending on the situation, though a safe place to sleep and warm food will be expected if nothing else. 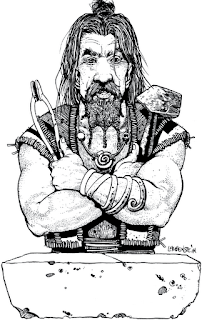 It is through these exchanges and traditions that the Weaponsmith continues maintaining the fabric of community. They would certainly never admit it, but they have no small amount of pride in how others see them and take decisive action against any of their number that will besmirch their reputation. Forges do not represent a group of free-thinkers and radicals, but a group that is very conservative, hidebound and traditional. The larger numbers in which they gather, the more this becomes true.

The Heartblade is another important aspect of the Weaponsmith Discipline. It represents that absolute pinnacle of their craft, the purest expression of their inner self that will ever exist. Depending on when it is crafted in their career, it may not have the most artistic or technical merit, but any Weaponsmith will immediately recognize a Heartblade for what it is and know that there is more to it than anything so crass.

Only a Journeyman Weaponsmith can even begin construction of a Heartblade; Novices do not yet possess a sense of self strong enough to fathom how to take something raw and refine it to purity. For many Weaponsmiths it is a dream that never materializes and for others one that is never completed. Still others, it is their final act - their last gift to the world. A council of elder Weaponsmiths must give the supplicant permission before embarking on this journey.

It is a process with eight distinct steps that will take place over no less than four Circles. First the hilt must be crafted, then followed by the pommel and then the guard. The ore for the blade must be gathered by the Weaponsmith and it must come from a lost kaer - commonly from the blade of an ancient weapon. Then the ore must be purified and forged. Next, the hilt and blade must be joined. Finally, the blade must be sharpened and decorated, culminating with a blood magic ritual to bind the Weaponsmith's Pattern to the item's.

Not every Weaponsmith will forge a sword, as described above, but the steps involved should roughly align. The Heartblade breaks a number of rules regarding Patterns: it is a Core Pattern Item for the Weaponsmith, regardless of how many other Pattern Items they have and of what degree. Heartblades can also be Thread Items in addition to Pattern Items. All of this shows how unique they are within the setting, the ultimate creation of a Discipline dedicated to the concept.

Recored By: Jak’Tak the Weaponsmith 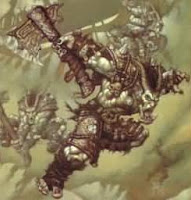 Sail through the sky on wings of magic. The world dashes below. Freedom accepts us into her bosom. To Throal! Sky pirates approach(4). Talk or fight? Fight! Sky pirates want Ohin’s honor. From our dead hands! Victory! Elmod fires a parting shot. It doesn’t do anything. Honeysuckle fought off four trolls by herself!

Two days and we reach Bartertown. Nephew, Jamon(5), hears the tale. A month in his inn is our reward. Throal is a beauteous feat. Bartertown is a chaotic creature. We go forth to make our Names real.(6)


(1) Oh Joy. At least there are some notes.
(2) Ohin Glonar Rurrun is his Name.
(3) We received these items along with this log. They have been cataloged under: Adventuring Groups: Mercantile: Hidden Sunset. The group has been in operation for quite some time with new members adding as the older ones die or retire.
(4) Korrolis, a troll Sky Raider, is likely who this is. His ship is the Sunset’s Betrayal. Ohin’s journal is scarce on details regarding him. Evidently something happened.
(5) Jamon Ulvar Rurrun is his Name. He has an inn in Bartertown, Jumping Mushroom, and connections to Maester Bleys.
(6) Received and edited by Ela Pono.


Despite what the log may suggest, this was a relatively full session - Jak just happens to be an ork of few words. Similar to the previous session, much of this was directed towards acclimating players to different aspects of the setting and system slowly. This was more travel, as well as life in the smaller villages within Barsaive and the importance that a Forge plays in those locations. These events would later become somewhat significant and poignant, the first taste of how things come to an end, but the importance of legends. This also continues my extended experiment in seeing how taking other material and adapting it to my meta-plot works out.


Some new plot threads were laid here and others continued, though some of that significance is only made clear through the footnotes. I generally prefer to start laying the groundwork for major plot lines sooner, rather than later, though there isn't a wrong way - some groups will be more proactive in setting their goals (a sandbox), others will want a more directed (not railroaded) experience. Earthdawn lends itself more to the latter for the first tier at the very least. Once Thread Items start becoming more important, the number of plots to follow starts to grow and most groups start to define their own priorities, taking turns at going after Key Knowledges.


During that time is when the work that went into the early game begins to pay off, particularly if the various plots are working together and feed into each other. The greater structure of magic within Earthdawn of Patterns, Threads and Weaving is very apt and works wonderfully when extended to how stories within the setting can play out.

This session also marked the introduction of boxes for each player. Since they were going to be getting more props, it was clear that they would need something in which to keep them. Also, dice rolling was getting a little out of hand at times - I'm not a fan of dice continually rolling off the table and onto the floor. To solve all of these problems, I picked up some pine boxes from a local craft store (Jo Ann's), wood stain in a variety of colors, and adhesive backed felt in a number of colors. The boxes were stained and the bottom of the interior and underside of the lid had felt applied to them. The idea being that the box would be a holding place and the lid would be used for rolling. Unfortunately for me, the lid tended to just become another holding place for Karma dice. The best laid plans.
Posted by Morgan Weeks at 04:26