Earthdawn: Anatomy of a Thread Item 55 - The Amulet of Dianuus 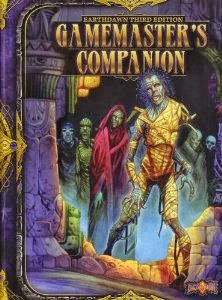 This is the fifty-fifth Anatomy of a Thread Item in an ongoing series about Earthdawn. Introduction and Index.

Found in the Gamemaster's Companion (pg. 41), The Amulet of Dianuus is a Thread Item first introduced in Arcane Mysteries of Barsaive (pg. 88). This is the first of three items in a set known as The Talismans of Dianuus. They are accompanied by a lengthy and tragically uninteresting story which adds nothing in particular to the item. This is brought up only because, unless there is something particularly interesting, neat, or fun, less is often more for this part. If nothing else, it makes it makes it that much easier/forces the GM to develop their own story tailored to their game. A lot can be implied by the right leading statements. Nonetheless, the do create a set of items, which can often be neat.

The Spell Defense is appropriate for the tier, but the thread ranks is just a bit beyond where it should be at seven.

A standard effect, so far so good.

And there it goes. Two effects, Rank Two, on a Journeyman item. Sometimes I wonder why there is even a set of guidelines.

This is a fairly standard effect, even though it is rather powerful (being significantly better than a Spell Matrix Object).

Three effects here. Multiple effects per rank is supposed to be limited to Rank Seven+, and the realm of Warden and Master tier items. No particular reason to mention this.

This is a little strange. It's two effects, but it's not a particularly good one. Something a non-Elementalist may be interested in, but Elemental Tongues isn't typically a talent in 3E anyone is excited about increasing.

That's another three effects. The bonus to Mystic Armor is officially approaching insane. Keep in mind crystal plate has Mystic Armor 7, the highest in the game.

Thread Rank Seven
Effect: Once per year, summon a Strength 3 elemental spirit from each of the five elements to perform a single service. If it is destroyed, the wearer permanently loses this ability.

There's more text here, but I didn't want to type it all out. This is reasonably powerful for a non-Elementalist, though not-so-much for an actual Elementalist. For the capstone, this is interesting, but hardly in comparison to what can actually be done with the Summon talent and the previous ranks. It is certainly very good, but the restriction is very rough. Also, the wording is strange. I cannot tell of the intention is for the wearer to be able to summon each elemental once per year, or there is one summoning and it can have a spirit from each element. English is tricky like that, but clarity is important.

How does it all stack up? This is powerful. The bonuses to Mystic Armor alone would be appropriate for six of the seven ranks. Then there is stuff to go along with it. The characters which will get the most from this are probably Illusionists and Wizards. The Spell Matrix creates a dead rank for any non-Spellcaster and Nethermancers already have their own summoning tricks. The other two magicians stand to gain the most from access to spirits, since they don't have that natively.

The magnitude of improvement to Mystic Armor could cause some problems. If nothing else, other players may be jealous of how many bonuses this provides (averaged to around 2 a rank) for the cost, which is very low. This has potential for abuse written all over it and should be carefully considered before it is included in any game.

Amulets have traditionally had a protective theme and this supports it through the magically defensive bonuses. The increases to Elemental Tongues are the odd inclusion and seem to come out of nowhere, along with the spirit summoning. These aren't abilities an Elementalist would be likely to create a thread item to support. Not in the slightest. These are considerations I like to see when crafting an item - what would the creator actually invest all of the effort for? Elemental Tongues isn't likely to make the list, nor a summoning ability (weaker than their talent) which can be permanently removed so easily. If it isn't freakishly dangerous, why not just break out the Summon talent and do it the old fashioned way?

Everything is consistent between editions here.

This is marks a change for the better in 3E - not limiting which discipline can use the spell matrix. There is also some nonsense in here about casting just using Perception and the Forced Spellcasting knack. Honestly, if an Elementalist can do all of this and they have to be woven to the item, why are they bothering to hand it off to a non-spellcaster? So they can spend an action fumbling around? There are almost certainly some edge cases where this proved to be useful that one time. However, I've never actually heard of this functionally playing out in that way.

Thread Rank Seven
Effect: Once per year, summon a Strength 3 elemental spirit from each of the five elements to perform a single service. If it is destroyed, the wearer permanently loses this ability.

This is pretty much the same, but it costs 1 Permanent Damage. Since this is locked to an Elementalist, I don't know if it is actually worth it.

They are very similar, but the 3E version is better for two reasons. The first is no Permanent Damage on the Rank Seven effect. It had best be really good to have those costs. The second is fixing the spell matrix into something not silly. Keep it simple and don't go through incredibly complex mechanical gymnastics when they aren't necessary. It does make me wonder if this was born in a home game and introduced virtually unchanged into the wild. It would make a lot of sense, actually.
Posted by Morgan Weeks at 03:00

Email ThisBlogThis!Share to TwitterShare to FacebookShare to Pinterest
Labels: Anatomy of a Thread Item, The Amulet of Dianuus, Thread Item