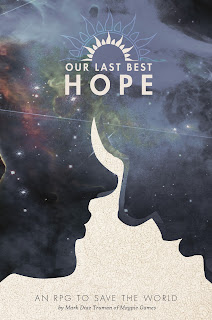 This is the second part in an ongoing series on Our Last Best Hope. Part 1.

In the first part some key elements of Our Last Best Hope were discussed, particularly those which make it unique and highlight how it emulates the disaster movie genre. This will focus on the setting up of the session we played.

To get started, we needed a Mission (where), Crisis (what), Limit (why) and Plan (how). Everyone wanted to go to space and fight aliens - no real discussion, it was a done deal. A Crisis similar to Prometheus was on the table soon afterwards: aliens created us and now want us dead. Why? It hardly matters, but we are going to need big guns and something inscrutable to stop them. From here it started to get a little weird, maybe go off the rails, maybe get awesome. Aliens in space was too obvious. These aliens were doing something in the center of the Earth, and we had to stop them there. 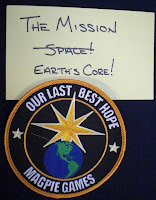 Now we have our Mission (Earth's core) and a direction to go for our Crisis. Inscrutable devices need equally ambiguous names. Numerous ideas were tossed around the table, but discarded because they were not pretentious enough (we're doing science!), or too scrutable. It wasn't long before the Mercury Key was said enough that it became our de facto inscrutable device.

This lead us to a slight speed bump: we forgot what was going on at the center of the Earth; d'oh! Well, aliens need an invasion and an alien invasion into the center of the Earth needs... another alien device! Of course, it's so simple! Our Mercury Key will do something that we barely understand with an alien wormhole-thing and stop the invasion, but the invasion has already started! Time is of the essence! Also, the alien wormhole-thing that will open and bring the main force needs a name that is clearly a match for the Mercury Key (what is that thing anyway?). We got stuck on Rubicon for a while - don't worry, you'll see it again. In the end, there was really only one name that was clearly the other piece to the Mercury Key: the Infinity Gate.

The Earth's core is the Infinity Gate and we have to stop the Earth's core! Messing around with two alien devices that we cannot possibly understand and have names like Infinity Gate can in no way go wrong, right? Perhaps another team will need to come after us to clean up the mess that we make down there. Sequel?

Our Mission and Crisis are now complete: Long ago the Progenitors created humanity and they are returning to fix their mistake. Earth's core is the Infinity Gate, a wormhole device that will allow them to sunder our world. Some of their kind are already here. 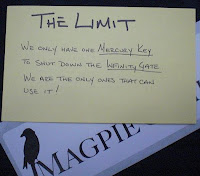 Nice. To the Limit.

Part of the plan is done, we have a Mercury Key, but we don't know much about what we're doing besides that. It seemed pretty clear that we had written ourselves into a corner - we wanted an alien invasion with the shooting and comrades dying in arms to a power ballad in refrain, but we were staring down the barrel of a long commute through lava. It's hard to justify mounting weapons on something that is swimming through lava because lava. If it can survive in lava, what can we do to it? When in doubt, crib from the best. Obviously the aliens have wormholes and have created a network of passageways through the mantle, Webways if you will, though the grunts call them the "Antfarm".

The Plan: We will use their Webway (the "Antfarm") to travel through the mantle to the Infinity Gate, where we will use the Mercury Key (which we don't understand fully, so nothing can go wrong, right?) while dealing with heavy resistance. And lava. 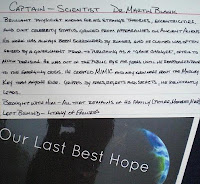 With all that in the bag, we were onto making characters. There are four roles (doctor, engineer, scientist and soldier) and each brings something slightly different to the table. Having four people, it was pretty obvious that we needed one of each. After a name and a background, there were some specific decisions we had to make. First, the Touchstones: "what you brought with you" and "what you left behind". These Touchstones will come out when resolving Threats and will be brought up later when it's more mechanically relevant. 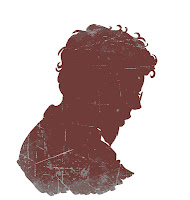 Our cast at this point: 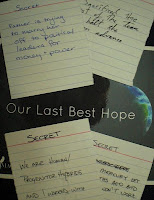 Turns out there was only one character actually interested in making it out alive.

The final parts of character creation were to choose two other characters, one that makes you Crazy and one that keeps you Sane, write down a Fear, and a Secret you don't want any of the other crew to know. Since there's no point in writing any of this down if it's not going to come up, interesting is a good place to go. Entertaining if that fails.

Here is what we came up with for the Fears and Secrets:

Now we get to choose our toys, er "Assets". We wanted a variety, though Brick made a compelling argument to just take lots of different guns. It is also suggested that you take a variety of Assets since you will likely be facing a variety of Threats. True to form, we all chose something related to our role: armored encounter suits, dimensional scanning equipment, heavy weapons and a repair droid.


The last thing before starting was for each of us to create a Threat. It's both fun and weird to create the very things that will be your downfall, but it certainly is strong encouragement to at least make your life interesting. There would be no long slogs through 10' x 10' rooms full of faceless orcs aliens. Well, not only that. It certainly did help to imagine the various awesome ways in which the crew could take on the Threat and use your Assets to do so, also prey on Fears of the crew, and generally have things go spectacularly wrong.

Having hand-crafted our doom, the brave crew set forth with the Mercury Key to close the Infinity Gate at the Earth's core. Morale was high and it never would be again.

Next, the first part of the actual play for our session: Crossing the Rubicon!
Posted by Morgan Weeks at 02:59