This is the second Adventure Log in an ongoing series about Earthdawn. Introduction and Index.

The Serpent River and its tributaries are the lifeblood of trade and travel throughout Barsaive. They snake across the province from Iopos, in the northwest, past the Blood Wood, along the northern face of the Throal Mountains in the northeast, down to Urupa, in the Southeast, then west to Travar before terminating in the Scarlet Sea and creating the Mist Swamps (a side effect of a major waterway pouring into lava). Trade from Kratas has only a short overland journey to gain access on the Tylon River, and Throal has a well traveled route to reach the Coil River, both which feed into the Serpent. It comes as little surprise that the two major cities without access to the Serpent, Jerris and Vivane, are noted for their airships. 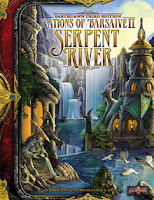 There is little doubt that access to the Serpent is controlled by the various t'skrang great trading houses, known as aropagoi, each with their own section of the Serpent that is jealously guarded against the other houses. The functional unit of t'skrang society is collection of families, or niall, that come together and form a village. Complex and likely draconian arrangements exist between the various families that allow access to other parts of the river, including other houses' territory for the particularly influential and crafty. The relationships of these various factions is typically kept away from the prying eyes of outsiders (it is never good for business to air your dirty laundry), right up until it explodes in a big, fiery mess on the deck of the offending riverboat (sometimes business be damned). 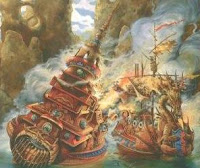 Travel along the river is primarily conducted on the highly personalized t'skrang riverboats. Keeping the secrets of their construction and power source are one of the few things that the t'skrang houses can agree. They are essentially steamboats that would trawl the Mississippi two hundred years ago. Complete with all of the reputations and miscreants. The simple act of getting on a t'skrang riverboat can be an adventure waiting to happen all by itself. The are powered by True Fire through the fire engine and may mount fire cannons for defense (sometimes for a very proactive defense). 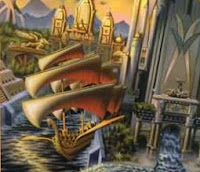 I have always liked travel in Earthdawn. It has a certain character to it that not many other games replicate, similar to the understandable love of trains and zeppelins in pulp genres (though it wouldn't be much of a stretch to consider Earthdawn pulp). Travel is unavoidable and often lengthy, as it can take you across the province in search of some bit of forgotten knowledge. Towards that end, I like to make it interesting - to introduce characters, encourage interaction, and develop the setting more. The Namegivers characters are travelling with have seen places, heard things, and possess some insights about the world. Also, those plot hooks aren't going to drop themselves.

I was traveling along the Serpent River, generally headed towards Bartertown in search of work. A steamboat came to town and a curious dwarf(2) in a rather nice red and blue trimmed waistcoat, looking agitated, asked if any adepts were in town.

Replying to him at the Smiling Rabbit Inn, a few other motley adepts discussed his offer of traveling to Lang, a small village off of the Serpent River. His missing couriers worry him that his village and strong box have been compromised. If we accept his offer of 200 silver we are to find his couriers, return the strongbox to the headmaster of the village and return for the last half of our pay.

The only other info is that an obsidiman liferock is near the village. He paid us out 100 silver each and we arranged to leave for Lang by riverboat. We also collected provisions and bough gear.

The riverboat dropped us off at the tributary to Lang; we took a large row boat to the dock near Lang. I made a fabulous banner favor for Captain Chandra(3). 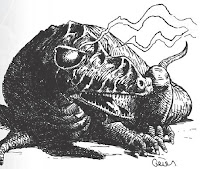 On the way to Lang village we found the dead couriers and strong box, apparently killed by lightning lizards, who we eventually dispatched on the path (with more bodies on the path). We took their eyes for souvenirs.

The village itself was obviously troubled, ransacked by some creatures. Some other villagers and dead obsidimen “revived” and attacked us posing no major threat, though a minor undead battle ensued.

Eventually we found the villagers holding a spot underneath the town’s main building. We talked with them, healing our wounds. They spoke of a tainted obsidiman liferock(4) a day’s journey away. We pledged to do our best to protect them. 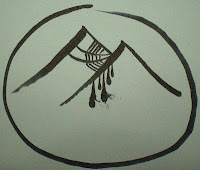 When we went to investigate, a number of crazed obsidimen charged us. We fought brilliantly and courageously to stop them. While doing so, I looked into the astral plane and found them dripping with black ichor and sporting a strange symbol. I sketched it and later had if confirmed as a Horror Mark (that Honeysuckle and recognized from a journal Valara had)(5).

After defeating the obsidimen we sought out their liferock a day’s journey away: It appeared tarred and still occupied by some dark thing which we didn’t bother to stick around to find out more(6).

The village was happy to hear of our defeating the obsidimen, have us a celebratory feast and a letter for Darron depicting our heroism. We returned the strongbox.

Leaving town we returned to meet Darron, collected our remaining pay, and an extra bonus. Jak received information of a forge to use in Bartertown, which is where we travel to next.(7)

(1) Also "the Humble".
(2) His name is Darron (see later in the entry) and is a Bartertown merchant dealing primarily with shells from Lang. He has some connections to Maester Bleys.
(3) Who is Captain Chandra?
(4) That sounds bad.
(5) Refer to entry under Adventuring Groups: Miscellaneous: Mismatched Steel - 01
(6) That is bad. I recommend we kick this up the ladder. Talk to Jana and Caramon.
(7) Received and edited by Ela Pono

This marked the first adventure with the "core" group of characters and is considered by most of the players to be the first adventure, which is an entirely valid way of looking at things. The originally planned adventure was based around a Beastmaser and a Nethermancer, so I delayed that again (it would never actually be played). This was the immediate solution and it worked well as an introduction for the three players that had yet to play Earthdawn before - the other player had one game under her belt. Having one player with a little experience went a long way in bringing the other players up to speed on how resources were best managed, which is a major part of Earthdawn (though hardly unique to Earthdawn). A considerable amount of the plot that would evolve was laid down here, some of it obvious, some of it less so. In particular, a key piece of information was given (not recorded here) that sheds light on a great deal that took place later. 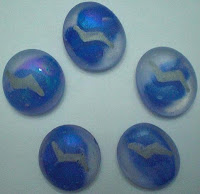 I have mentioned previously that I like to run tactile games, and this is where I introduced that aspect. A common feature of creatures in Earthdawn is that parts of them are valuable and can be harvested and sold. Writing things down on a character sheet is fine for bookkeeping, but it isn't very visceral. So I made some lightning lizard eyes using some glass beads that were clear with a blue iris. Initially I tried to etch them with an etching cream - it did not turn out so well. That plan will require a sand etcher to work how I intended and that is more of an investment than I wanted to make, even with a 40% off coupon at Michael's. Employing a silver marker produced the almost final result.

They were very popular, in fact more popular than I had imagined. Two things came from that development. First, the players didn't want to give all of them up; they wanted to keep some of their treasures. Second, the silver markings were rubbing off from excessive handling. The second issue was resolved with some matte sealant. I didn't want to take the loot away from the players, but I did want to give them the rewards they had earned. To solve this, I created a house rule about decorating loot. This allowed them to receive the Legend Points (and more), expend money, use artisan skills, and keep their toys. It was a win for everyone. The difficulties of the tests as the value of loot increased was still being ironed out, but it is fun and that is what this is all about.

In the forthcoming entries in this series, I will be covering the other game aids I made as they come up.
Posted by Morgan Weeks at 02:57