This is the first Adventure Log in an ongoing series about Earthdawn. Introduction and Index.

As requested, I am starting a new column as a part if the ongoing series on Earthdawn: Adventure Logs. My goal is to use these to not only showcase actual play in Earthdawn, but to introduce setting elements, discuss GMing in general, using props, and adapting material that is already out there for use in an ongoing campaign. These are the logs as recorded by the players in-character. All of the players for this game had never played Earthdawn previously. 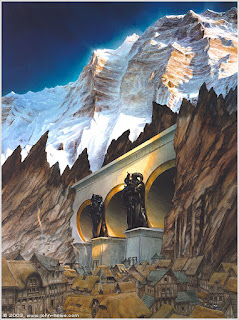 Adventure logs are a clever piece of the setting that gets players to take notes on the session - something that players are not always willing to do (it can feel like work), but Earthdawn puts an in-setting spin on it that provides rewards. The premise is that the Great Library of Throal will purchase logs detailing the activities of adventuring Groups and make them available to in the Library to others for research. Their stated goal is to gather as much information as possible, particularly the dangers, new environs and kaers that have been opened, but as well the cultures, people and happenings within the world. The Group is paid based on the "importance" of the work, and it goes into the Library to be referenced by others. The payment is a fraction of the Legend Points earned during the events in the logs, and additional Legend Points are earned when it is turned in to reflect that the characters' legend spreading through others reading of their exploits.

Within my setting, there are some other things taking place which are not openly discussed. The Great Library processes astounding volumes of intelligence from around the province and beyond through these adventuring logs. This information is potentially vital to the security of the dwarf kingdom, particularly with regard to the looming conflict with the Theran Empire and other more local threats (Horrors, Iopos, scorchers, crystal raiders, etc). The Great Library performs the public mission statement, but the scribes are also intelligence analysts. The junior scribes will read incoming logs and if anything raises a flag, it will be handed off to a more senior scribe who will route the log appropriately and it may be altered during transcription to be entered into the Library; originals are never on the floor (adventurers and dirty hands). This goes unnoticed; few adepts are so narcissistic that paying to read their own exploits is worth their time. Handwritten copies are also prone to all of the errors that come with handwritten copies. 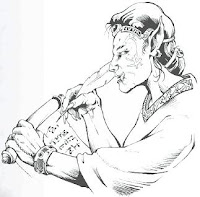 This means is that the original adventure logs contain footnotes from the scribes of the Library which reveal Throal's interest in the contents, as well as the identity of the scribe who performed the detailed analysis (and some personality of the scribe). These notes are not available to those outside of the senior scribes. The out-of-character goal behind providing this extra analysis to the players (not the characters) is to communicate some of the bigger picture if they are interested. 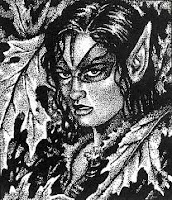 It was time to be going. Leaving Glenwood Deep for a life of adventure was a difficult decision to make because my teachers wanted me to stay and be a Windmaster for the community. I wanted to see Barsiave and the great cities. Travelling alone for the first few weeks was lonely; outside of Glenwood Deep you don’t see many other windlings(1), but I have seen many new races like orks, trolls, and dwarfs that don’t usually travel through Glenwood Deep. I met Valara at a fork in the road, she was also pondering the way to go as she too had just left her home for the life of adventure, we decided to head into the nearest town together and stock up on supplies before continuing on our journeys. 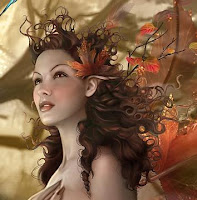 This was a small town near the woods and many of its people were lumberjacks. Upon entering the town of Tsennan(2) you could tell something was not right. Hearing that Valara and I were adepts, the townsfolk asked up to head into the woods to look for a group of missing lumberjacks; including three humans, two orks, and a dwarf. They were to return days ago and have not been heard from. Before leaving we met with the local healer Genna (who was the mother of Tartuk, one of the missing orks), who gave us some healing supplies to help us on our journey. We reached the camp before sundown and found it abandoned and in ruin. Food was left of the table rotting (knowing how poor this village was, food would never be wasted like this) we knew something terrible had happened to the lumberjacks. We took some time to search the camp finding a trail in one direction and no other clues. I could tell we were being watched as we searched. I checked out a strange rustling in the brush and was nearly eaten alive by a snow leopard cub(3). Valara insisted we pursue the cub to care for it and after tracking for a bit we caught the cub and Valara turned it into her new pet. I can see that being friends with a Beastmaster will be more dangerous than I originally thought. 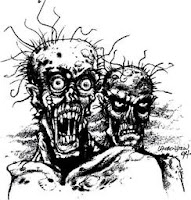 We headed down the trail left by the attackers and found the first body not too far past the camp. This body fit the description of one of the lumberjacks, the dwarf Geleem, he was badly beaten but you could tell this was not done by animals. Following the trail we came upon a clearing with a cave entrance, tied to the trees were the bodies of four more lumberjacks, the only body missing was Tartuk. Wandering around this area strangely were these creatures that looked like they should be dead. We went toward the opening of the cave when these things attacked us. Valara and I knew we had to fight, though Windmaster training didn’t cover bodies that rise from the dead(4). It was a gross, ugly fight. As we fought these things they exploded with a vile stench spraying everything in the vicinity. It took almost everything we had, but we defeated them. As disgusting as we were we didn’t wait to go into the cave, whatever was happening must be coming from there. 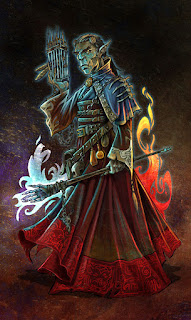 The cave was dark down the tunnel and then opened up into a large room where a fire was going, with a large pool of blood and a large troll was performing some type of ritual. I thought we had seen the scariest part of this and boy was I wrong. Out of the pool of blood arose one of the missing lumberjacks with axes for hands, it was Tartuk(5). He had been sacrificed for something evil. Not wanting to see what happened next we rushed in to fight this evil Nethermancer and the unwilling sacrifice. Turns out this was a really bad idea after the fight we had outside. This sorcerer sent his sacrifice after us and then casted some type of magical darkness in the room making it impossible to fight. Valara and I decided to retreat and regroup. Outside the cave we took time to clean up and rest while strategizing what to do next.

We headed back into the cave because we couldn’t return to the town with one of their lumberjacks being controlled by this Nethermancer. It took all of our tricks and strength to defeat the sorcerer and put the sacrifice out of his misery, but we managed to be victorious. Searching the cave we found the Nethermancer’s journal(6) bound with the skin of some poor creature and the mark of a horror upon it. This was bigger than we had imagined, this Nethermancer had been corrupted by a Horror(7).

We returned to the town to deliver the devastating news of what had happened to the lumberjacks and warned the townsfolk not to go up there. We spared Genna from what actually happened to her son; instead we told her he was simply killed by the Nethermancer. We didn’t stick around the village very long; it was too depressing after what they had been through. Valara and I headed off for our next destination, whatever that may be. (8)

(1) I hear that Glenwood Deep is infested with them.
(2) Find location of Tsennan, see further footnotes.
(3) If only...
(4) This is a curious and unexpected piece.
(5) Perhaps this bears investigation.
(6) This journal should be found for safekeeping.
(7) Tragic, but unsurprising.
(8) Received and Edited by Ela Pono. 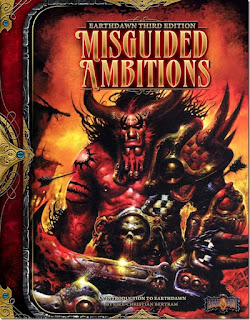 This was the first adventure, though not all of the players were able to make it. Instead going with the original plan (which never happened as intended), I used an introductory adventure that used to be available on Redbrick's website and adapted it to fit where I wanted things to go. It has all of the rules you need to get started along with pregenerated characters. The adventure itself has some good moments and strong horror elements. It is a fine, free adventure, though fairly challenging for only two characters that are highly specialized and unfamiliar with the rules.  Both players were initially reluctant to use Karma; it is a resource that is not infinite. Both remarked, in retrospect, that they would have used Karma more often if they had understood better how easy it was to get more. The Beastmaster and Windmaster can use Karma with starting Talents that improve damage, Claw Shape and Dive Attack respectively. These Disciplines are not the most straight forward, particularly the Windmaster which has some of the more complex Talent interactions.
Posted by Morgan Weeks at 03:13