This is the ninth Adventure Log in an ongoing series about Earthdawn.Introduction and Index.

The Servos Jungle is my favorite locale in the Barsaive setting. It borders a number of other important locations, including Kratas and the Serpent River, and is rather huge. I prefer to think that it is even larger than can be depicted on a map. That it contains so plateaus and vistas that have not been seen by a Namegiver since the Scourge began. This is a place of wonder and darkness, where rivers flow uphill and within the boughs of the trees. Where predators that have not yet been given a name dwell. Where lost civilizations and the Horrors that brought them to an end wait to be discovered.

Despite how much I enjoy the Servos, like many things it is best not to over use it - it will lose it's mystique at that point. My goal is to instill in my players a distinct sense of fear and excitement over venturing into its depths. The jungle t'skrang and Cathan tribes are some of my favorite. The former because they are enormous, savage cannibal lizard people, and the latter because, well, they deserve their own paragraph. There will be danger, excitement, treasure, things to explore and legends to be made. Above all else, it cannot be boring. There is always something within the Servos that is bigger than you, and they are always hungry.

The Cathans are a small and wiry ethnic group of humans that lived out the Scourge within the Servos. Given Blood Wood, this should make everyone who knows anything about them at least a little nervous. Each campaign I try to give them a different backstory and will inevitably have them feature in some way (I cannot actually help myself). For this particular game they are nearly peerless Nethermancers (just don't tell the Iopans) and certainly talented Elementalists and Shamans. How exactly the rode out the Scourge remains a mystery, but there was not a jungle in the middle of Barsaive prior to the coming of the Horrors.

If you are looking for a place to hide a citadel and a lost empire without resorting to extensive magical hoops (this is in no way a condemnation of magical hoops for such things), the Servos is an excellent place to start. It possesses water and once had easy access to the rest of Barsaive. The interior has been poorly explored at best (it's not very safe, to put it lightly), and even then mapping a nearly trackless jungle darkened by an extensive canopy is not a simple task. This is one of the finest places in the setting to develop as you see fit and any Group will almost certainly pass by at some point, moving through the glowing waters of Lake Pyros on the way. Adventure, excitement - an adept craves these things.

Recorded By: Ting V’strimon the Merciless of Urupa 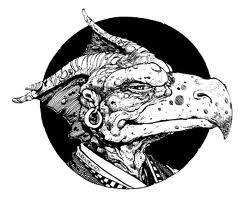 As always after a big problem is solved, it is now a time of a lot of puttering around. I spend most of my down time swimming in the river and throwing various nasty things at people looking like they deserve it. After a while we make our way to Bartertown. Elmod is doing stupid wizardy(1) stuff in the library, while Jak is… fixing random crap. Figured I would check out the arena again(2). Got myself a fight with some dwarf who spends way too much time on his face. Invited my friends to come watch me show off. The fight was drawn out and quite invigorating, and after much persistence, I managed to make him yield, making me and friends some cash. All is well. Also got an awesome eye cross scar. Spend some time healing up, and met Sogun, who seems to get dumped on us.

Elmod also is wanting to get us killed going into the woods so he can find out more about his creepy-ass doll; so I spent all my winnings on poison preventing potions and rations. Broke again. Hoping I can take training money out of the party treasure.

Took a riverboat into the jungle, to talk to some dudes from Throal. In the middle of nowhere. One was a windling(3). The other had a task that we could do. Something plant-like and glowy. In a temple somewhere. The dwarf is old, not sure I would want to travel the jungle with this guy. But he’s insistent and has money. So we go into the jungle. Windlings buzz around, old dude is on a donkey. And I don’t sweat. Everyone but the rock guy(4) is getting stinky. Got attacked by a howling wooly bear-like(5) critter that night. It’s blue(6) and probably really hot with all that fur. Honeysuckle chased it off and I went back to sleep. Nothing really happens in the next day except we keep seeing something spying on us. Next day we manage to make contact. They did not seem impressed by my greeting, which was a shame. Threatened us vaguely, and let us know that others were traveling in the area, don’t sound like anyone we want to encounter. After some charting, we manage to get lead back to the village by giving them some spare weapons. Guys have some cool tats(7), but they don’t want to talk about them. 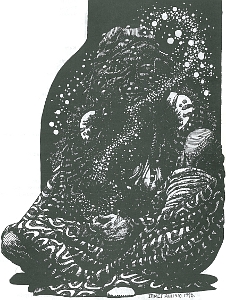 Notable village! Most people here tend to shy away from he, though there was some crazy great dancing. Got as may tips as I possibly could! Elmod got his talk in with the elders. When I saw him the next time, he still looked pretty high. After that we go back out into the woods. Old dude starts getting sicker. We met some t’skrang with the scary masks the villagers warned us about. Wrested a promise not to hurt them or reveal their location. Which we made. Seemed cautious, but seemed willing enough to let us go on our way. They did take us to their village for the night. Swapped some stories and techniques on murdering.

Traveled a day, and got attacked by some pretty moth creatures. Huge with awesome wings, we cut them off once we murdered them(8). Next day’s encounter was a giant mantis creature which turned out to be a guy from Theran Empire(9). Offered to share camp, which we were awkwardly led to, be we declined and left the group. We met the ork, pretty boy, two t’skrang(10), six soldiers, several elf slaves. Left at that and made camp a couple miles away.

We traveled a bit and found the temple. There was a suspicious pile of red gems(11) at the entrance we grabbed, and then went inside the courtyard. Found some fancy looking water we filled a skin with water, know when that might be awesome. Inside the temple was fucked up. The flower fungus was found as well as this really trippy Horror skeleton(12). With faces and screaming bones. Jak found a huge sword made of solid water. Super wicked looking. We left the temple, we go to make camp. Old dwarf made tea out of the mushrooms, which we all drink. Next day we find a different t’skrang village that was deserted, that an elf slave that escaped was hiding. Jak made heal checks and we chatted him up. But Therans crashed in, saying t’skrang are after them. Where they were. I was all for the t’skrang to finish them, but Elmod managed to convince them to take Blood Oaths from the surviving slavers, never take slaves again. They then accompanied us the rest of the way out of the forest. We met up at their airship(13), and they gave us a ride out, as well as a shit-ton of gold. Beautiful, beautiful gold. I’ve been sleeping with it ever since.(14)

(1) Most likely stupid Nethermancy.
(2) Ting is a known associate of Tarr, see entry catalogued under: Adventuring Groups: Miscellaneous: Mismatched Steel – 004. We have had little success in tracking Tarr and his fighting rings.
(3) These would be Wivun and Skreet, my condolences.
(4) Or obsidiman if you don’t like offending the Namegiver that weighs half a ton and can do pull-ups.
(5) A brithan, not to be confused with the caterpillar.
(6) This is very doubtful, but if it is blue, we’ll all hear all about it from Wivun. Part of his theory of adaptation due to environmental stimulus or some-such.
(7) This makes me suspect Cathans. You have no idea how cool.
(8) Death moths.
(9) WHAT!?! This needs to get kicked upstairs.
(10) We need more information on these t’skrang. Are they K’tenshin?
(11) Curious.
(12) Good thing Zamirica didn’t receive this one!
(13) A vedette this far East? This is bad.
(14) Received and edited by Ela Pono.

Without any sugar coating, this particular adventure (in conjunction with the previous session) were the low water mark of the campaign. The adventure itself was adapted from a published adventure and it was not without problems from the beginning, which were compounded by mistakes on my part and some of the players having little desire to engage with the events. It was a trifecta of issues that worked out in the end.

The Therans, as presented originally, are totally and completely unsympathetic. Why anyone would ever want to interact with them beyond the initial meeting is beyond my understanding, let alone protect them in the end. Given the time period of my campaign (pre-Triumph), the presence of Therans is rather unusual, so I used that to announce future badness. The composition of the group was altered and made friendlier in general, though I included two t'skrang of the K'tenshin arapagoi as part of the deeper plot. They also weren't simply a hunting and slaving party, but actively looking for something.

All of this may have gone well, but the ultimate decision was to not interact with them at all. There was the fear that the Therans would simply try to kill them outright, coupled with an outright hatred of them by some characters that I didn't know about. Which was when things started to fall apart. There is a valuable lesson about communication and knowing your audience in here, as well as fostering healthy group dynamics. Above all else, communication; it is the most difficult and most important part of gaming.

One piece of loot was the suspicious red gems they found are blood gems. An element of my setting that exists on a meta level as a warning: something bad happened here. They are produced from blood magic that a Namegiver died for. Whether that was from a dying act to save a friend, or as an unwilling sacrifice, is impossible to determine. Sometimes the droplets of blood from that act will crystallize into small, faceted gems that always look slick and sometimes gleam with an inner light. Their monetary value is minimal (there is something of a taboo in openly trafficking in them), but they do have some value in magical creation. They can be used as an ingredient (no more than half of the cost in ingredients), or to provide a bonus to the enchanting process - just not both. So far nothing has been done with them, but I strongly suspect no one actually remembers all of this no matter how many times I repeat it. 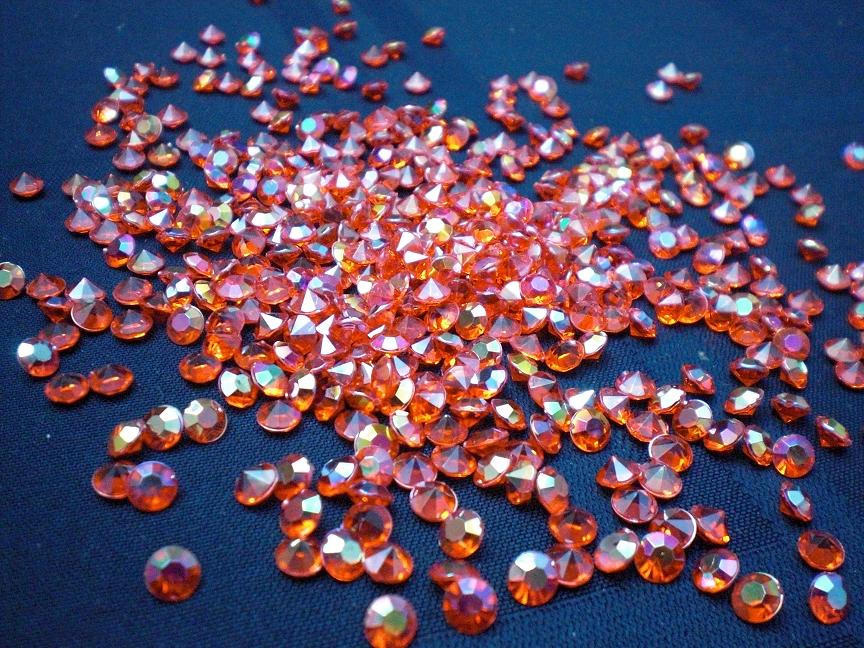 The other piece of loot introduced was death moth wings. For these I used a yard of crushed tulle and cut it into triangular sections in an effort to replicate moth wings. Since they still needed to fit in the boxes, I decided to keep it simple. The downside to this is the tulle has interacted poorly with later introductions into the boxes. Particularly jehuthra webs, which is really just fitting. These would later become one of the favorite pieces of loot to decorate. It got... elaborate and expensive. More on that in a future adventure log.
Posted by Morgan Weeks at 03:08