This is the second Anatomy of a Thread Item in an ongoing series about Earthdawn. Introduction and Index.


If you happen to be a player in one of those games, please do not read this series. There will be spoilers and some of this information is subject to change.

This Thread Item was created pretty specifically for one character to support what they wanted out of their Discipline. I started with a set of mechanical goals and a set of story goals. The mechanical goals were to address common issues faced by characters using Second Weapon and support a Swordsmaster that was having issues deciding what was more awesome - a big ass sword, or two swords? "Both!", was my answer.

A significant obstacle associated with Second Weapon in general is the cost: for the Talent to be worth it, the weapon has to be worth attacking with. This means it will need to be forged and ultimately a Thread Item. That means money, Legend Points and Threads, the latter two are valuable resources, one rather limited. All of this is for a Talent that you may not necessarily use every round - it costs Strain and your primary weapon will be better, so Second Attack (if you have that) becomes the first additional attack to use.

To address all of this, I created a Thread Item that can become whatever melee weapon is desired. This allows for a single big weapon (eventually, really big), multiple medium weapons (including the potential for a tail weapon), or lots of small weapons for throwing or concealing. Overall, there is a nice blend between straight forward damage bonuses and subtle combinations that can be capitalized on later. The mechanics developed here figured in nicely to the overall story that I wanted this item to be a part.

Story goals are based around introducing certain elements into the game, and there are a few elements that this item touches. The first and most prominent is the story of a legendary figure from before the Scourge, Jynis Y'mns, and her activities in the nascent Barsaive. Her legend and legacy will figure prominently for one of the characters, in particular her failures. While she accomplished many great things, she left some very important things unresolved.

he other element that I wanted to introduce is a somewhat touching story of love, though leave it a little ambiguous. Between two Namegivers that clearly can never be together; their worlds are completely different. I wanted to juxtapose their associated elements, earth and water, with how the addressed developments: earth cannot deny what it is, but water can adapt to what it needs to be. This leaves open the question of what water truly wants. That particular resolution will be required (even if not listed) to further develop the legend of this item. 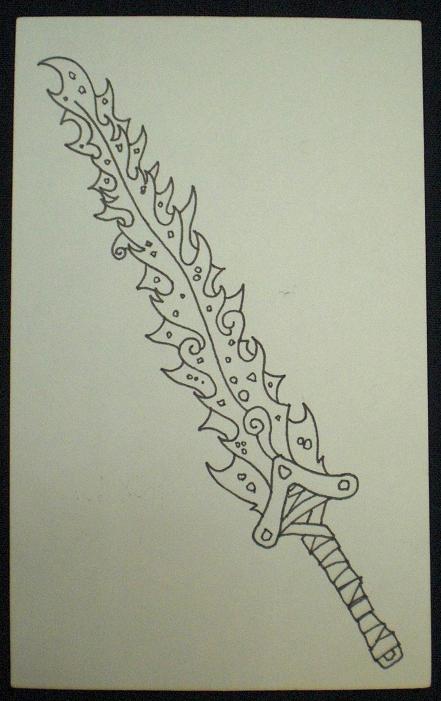 The default appearance is a two-handed sword with an intricately carved stone hilt lettered in archaic t'skrang. The blade is blue crystal shaped as a crashing wave, embedded with True Water and with carvings in obsidiman. When immersed in water the blade almost disappears, only a shimmer betraying its presence.

Key Knowledge: The wielder must learn the weapon’s Name.
Effect: The weapon’s Damage Step is now 14.

Thread Rank Two
Effect: For 1 Strain, the wielder may split the weapon into smaller weapons, totaling Size 6, as a simple action. The Damage Steps for these weapon’s are as though they have been fully Forged (e.g. a broadsword, Size 3, would be Damage Step 8) in addition to any damage bonuses from further Thread Ranks being applied fully to each weapon.

Thread Rank Six
Effect: The weapon gains +1 Damage Step (+4 total). Additionally add +1 to attacks made with the weapon that do not use the wielder’s primary hand.

Thread Rank Seven
Key Knowledge: The wielder must learn the fate of the creator and first wielder.
Effect: The weapon increases in Size by 1, with associated damage increases when wielded at Size 7. Additionally the weapon gains +1 Damage Step (+5 total).

Thread Rank Eight
Effect: The weapon gains +1 Damage Step (+6 total). Additionally add +2 to attacks made with the weapon that do not use the wielder’s primary hand.

Back Story
Before the Scourge and before Barsaive was broken, there was an obsidiman who loved that which he could never have. He would stare longingly at the waters of the Aras and the Serpent, the waves lapping at his feet, but he would always be a Namegiver of Earth and never truly know the kiss of water. As a testament to his love, he crafted a weapon of both worlds.

Key Knowledge
Rank One: Unrequited Wave
Rank Three: Pytkriss
Rank Five: Jynis Y'mns
Rank Seven: The first wielder, Swordmaster Jynis Y’mns, died battling the Horror Nu’wyve. Pytkriss took up his Heartblade and was a great hero by any standard, but over time he could not bear the weapon any longer: it was a constant reminder of what he lost. He retired to his Liferock, Ayodhya.
Posted by Morgan Weeks at 02:47