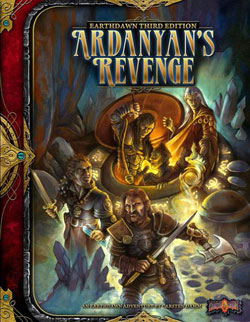 This is the eighth Adventure Log in an ongoing series about Earthdawn.Introduction and Index.

Prior to the Scourge, the Mad Passion Raggok was known as Rashomon. At that time his ideals were endurance, leadership, perseverance and tolerance. None of the other Mad Passions were twisted to the degree of Raggok, and now he has the ideals of bitterness, jealousy and vengeance. 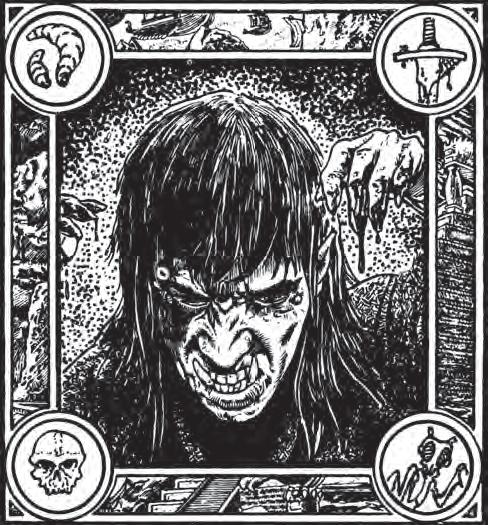 Raggok is closest Earthdawn comes to the standard fantasy evil god, often appearing as a large man with a ram's head and open, festering wounds. The common elements associated with him include cold, insects, skeletons and the undead, weapons and wounds. His generally associated powers involve calling up painful memories to torment, inspire hatred, raise the undead and just generally everything you would expect the localized incarnation of evil to do.

His followers, questors, tend to either wallow in debauchery, flaunting their wealth and wasting it, or to lead lives of deprivation and spend all of their resources doing whatever they can to make things worse for those around them. Though there are certainly shades of grey between those extremes, all questors of Raggok have an investment in making the world a generally worse place to be, particularly on a personal level.

Ting and I found Honeysuckle and Jak left town quickly. I talked with Issir Faang(5) again and was reinspired to look for the amulet he previously spoke of – the spirits being restless. He also offered an old item in exchange for the amulet expedition.

Ting and I then gallivanted into the forest at night, trying to be quiet, but either way were undisturbed by the forest elves. We found the amulet in an old shallow grave of a humanoid skeleton. We returned, Issir looked and inspected the amulet, and returned it to me. Also he gave me a strange doll. We parted.

Ting made friends with Wuschwusul, a new t’skrang in town, that also came in with an obsidiman Warrior, Caedrus. Ting had fun gallivanting with Wuschwusul.(6)

Returning to have tea with Issir again, I found he had vacated the premises. Asking around I found no one even recognized he had been there until I found a poor willed soul that revealed Issir had fled anonymously and threatened death to those around his house – and he’d left through the West gate (which also did not see him leave). His place vacant, I began to live in his house.

I saw Ting shortly thereafter reporting that our companions, Honeysuckle and Jak’Tak had returned to town. Reconvening with them, we discussed leaving the town to catch up on the poor climate of the elves in town.

On leaving, however, we found that posters identifying us as outlaws (including an obsidiman Honeysuckle and Jak had met outside of town). Guards were promptly alerted to our leaving and we fled through town.

Down an alley. Honeysuckle and Jak’s friend, Titoo, gets our attention to come and follow him and we proceed to follow and hide in a cellar of his.

He discussed how Grankar Eisengeisser was captured by the local elf conglomerate, also looking for the kaer that Honeysuckle and Jak found previously. A hastily devised plan is made to rescue Eisengeisser at the Council Hall’s basement. Ting asks her new friend to try and create a distraction to five us advantage. We set forth with disguises from Titoo.

Explosions are heard in Hangside(7) as we near the Council Hall’s rear gate. Many guards are seen leaving. Honeysuckle flies through the gate and mostly kills the two guards, one of which I finish off with an Astral Spear quite handily. Keys are found as Titoo opens the gate and we proceed through the house.

We meet a group of six guards at the front door. We battle for some time. My foe wounded me most furiously before I eventually ripped his spirit from him finally. The others fought well too. We locked the doors and fought the remaining guards in the cellar and the stairs. Grankar and hooded prisoners were found along with a secret passage in the treasury.

Following the passage since the prison doors could not be opened, we found a shrine to Raggok – a Mad Passion. The passage eventually leads to a passageway with pit traps and a magically concealed passageway to a cave passage to an underground kaer.

The kaer was teeming with life and population. We were still quite haggard from the battle and were noticed as outsiders – not least by some Illusionist that tried to “summon” some Horror-like lizard beings(8). It was enough to let him get away, though he was spotted as associated with the City Council of the city of Ardanyan by his ear clasp.

Finally reaching the Council Hall in Kaer Ardanyan, a dwarf, Joran, lead us to a chamber to talk (in deference to the angry mob alarmed at our entrance and presence). We informed him and his elven counterpart about the end of the Scourge and corruption of their Council members who were corrupted the city of Ardanyan. Leldrin was also additionally responsible for deluding the Kaer by claiming a Horror at the gates to the kaer. Other things about the Questor of Garlen.

We reluctantly agreed to appear in chains to assuage the townspeople’s fears – however somewhere we were also duped as Joran was impersonated by the Illusionist Leldrin (one of the other corrupt leaders of the city of Ardanyan). We chased him to the entrance of the Council Hall, but he escaped with invisibility.

Returning to the commotion in the city of Ardanyan, we revealed the corruption of the Council to the angry mod of townspeople – lead by Ting and eventually backed up by Joran.

Joran bestows us titles of Protector’s of Ardanyan as well as giving us a recently vacated property in Hangside.

Jak sold some of our recent loot to purchase an alchemy lab that I helped prepare. I hope to soon learn additional alchemy skills and knowledges. Other people people improve their skills as well.

Titoo was employed to watch over our new alchemy lab for 50 silver/mo.(9)

(1) Known associate of Fastoon Julari Makanth Phunkot of Iopos. Trained under Mestoph, if that information is possibly correct.
(2) An uncommon Discipline, particularly in this part of Barsaive, the Windmaster is a community guardian, similar to a Warrior, for Windlings of Glenwood Deep.
(3) Known associate of Maester Bleys and Omasu.
(4) Known associate of Tarr. Trained under T’Skee “the Magnificent”, Swordmaster of V’Strimon. See cataloged: Adventuring Groups: Exploration: Fourfathers.
(5) Human Nethermancer residing in Ardanyan.
(6) Wuschwusul, a Swordmaster of Syrtis. Caedrus, a Warrior of Ayodhya. See cataloged: Adventuring Groups: Mercenary: Scale and Stone.
(7) Regarded is as the “nice” part of Ardanyan where the ruling elves and their favorites resided. A forested area on the South side that is elevated and overlooks the rest of Ardanyan.
(8) Leaping Lizards, I believe.
(9) Received and Edited by Zamirica One-Knee. 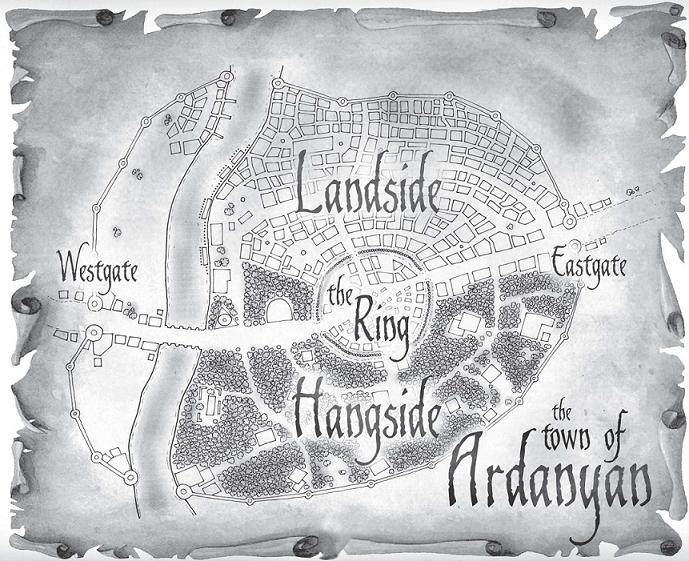 This session marked the conclusion of the "Ardanyan's Revenge" arc. Some old threads were followed up on and I introduced the first real Thread Item, the Sinistral Puppet. The first half of the session went very well. Returning to Ardanyan and evading the guards was tense, and the wanted posters gave clear hints that all was not right (they were based on characters present during the previous session, not the Group as a whole). Following that was some planning and a daring nighttime raid on the Council Hall. This was exciting and full of action, the pressure was high and the pacing excellent, right up until they started exploring the kaer.

When the characters arrived at the kaer things took a turn for the disgruntled. The immediate actions of the Illusionist within and the responses from the kaer-dwellers served to frustrate some players. Essentially, a lot of the details and importance is lost if you are not actually from the kaer. With that buy-in, the tension can be maintained as there are different repercussions and some investment in how things go (also real fallout from actions outside). The big meeting at the end had something of a deus ex moment where the overall villain makes his escape. Given the significantly differing power levels, he has tricks at his disposal that the players are powerless against, but all he does is make an escape. Regardless of how you approach this adventure (from within or outside), some players will be unhappy with how this plays out.

In all, it is a good introductory adventure and plays best as the starting point of a campaign. The end is somewhat dodgy, but everything leading up to that is good. If nothing else it can be mined for a lot of ideas. The epilogue was fine and the fallout from what happened can keep Ardanyan a simmering issue for quite a while. It holds a lucrative location and will always be a target for scorchers, but now lacks any cohesive leadership. The town is bursting at the seams with new inhabitants and clearly cannot support all of them. Also, the relations between the various factions is approaching an all-time low with the betrayal that was revealed - the money that everyone is fighting over is all gone. I went with a slow burn on the problems as everyone has just gotten out and there is relief, but the tensions and resentment remains. The local adepts largely left to see the world, leaving the city even more vulnerable. Things in Ardanyan are going to get worse before they get any better. Certainly the Protector's will continue in their new responsibilities? 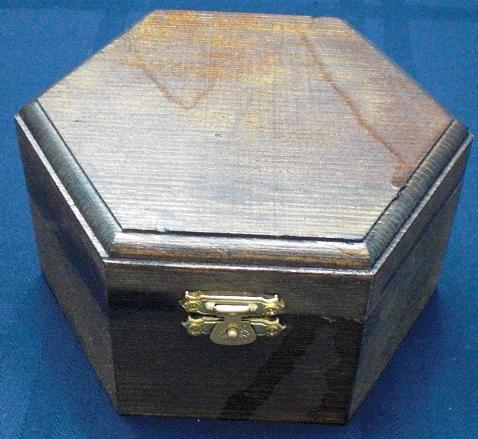 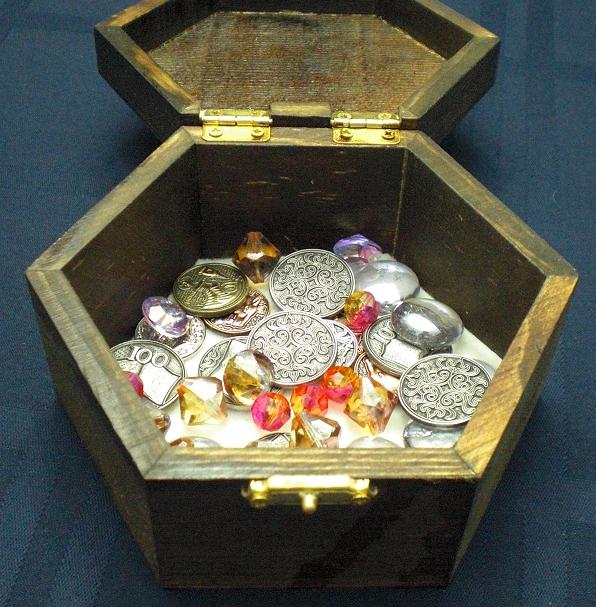 While it wasn't introduced in this session, the group treasury was an element which really helped to bring everyone together. The idea certainly isn't a new one, but many players are hesitant at the idea of one player recording all of the group things and effectively having control over this resource in addition to their own resources. This is not an unfair sentiment. To directly address that, while still providing the benefit of pooled resources, I got a physical box to keep everything in. It's similar to the player boxes, but a little smaller, a different shape (hexagon vs. circle), with hinges and a latch - it is clearly a different box. Since money is tracked by actual coins and nearly all of the other consumables have tokens, everything fits in the box nicely and can be clearly interacted with by each player. This means there is no gatekeeper to the funds, that donating to it is as simple as tossing coins inside, and what is available is readily apparent. The actual results are very different as well. Since it's introduction, most of the players donate nearly everything to the group treasury. One player only donates most of it, and he gets some gentle ribbing, which is still remarkable. The physical construct focuses attention in a way that abstractions do not. For any groups looking to promote more cohesion, I cannot recommend these enough.
Posted by Morgan Weeks at 02:38