This is the fourth part in an ongoing series on crowdfunding. Overview and Index.


Time for updates on projects of the past, those ending soon and those recently added.

First the past: the book for a project which ended in mid-May arrived in the mail last week. Expect to hear more about CandyCreeps soon.

Next up are some projects that I've talked about previously that are ending soon. Synnibar is, tragically and predictably, DOA at this point with under 10% of the funding goal and less that two days left. Project: Paradigm is still going to be funded and has four days to go. I would suggest any fans of Mage: The Ascension to at least take a look at this one. SteamCraft has 20 days left and is about halfway to meeting the funding goal. Shadows of Esteren has made the Book 0 Prologue stretch goal, which now includes PDFs of the GM screen so that you can easily make your own. There is also now the option to increase your pledge by $25 to pick up an additional core book (up to four), which is a pretty great deal for any group. There's under half a day to go, so if you haven't pledged or have and want to adjust your pledge, I would suggest you do so now.

Finally we are at the two new projects that were added last week. 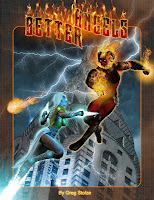 Better Angels is a supers game by Greg Stolze that caught my eye and I know that I'm not the only one since it has already made its first stretch goal - a free adventure. The premise is that you are a normal person who has been possessed by a demon and granted superpowers. As a basically decent person (this is an important assumption) you are put in a difficult position: You don't really want to do evil, but if you don't the demon is going to find someone who will. So you have to meet its demands, but you go about it in such an over-the-top fashion that your infernal co-pilot will be delighted with your panache as well as ensuring that some superhero is bound to stop you from succeeding. Better spend a lot more time on your escape plan than your actual plan. Which brings in the superheroes who are possessed by superpower granting angels. Life, it is not fair.

Powered by the One Roll Engine (ORE) flavor used in A Dirty World, this is a game that delights me to know it will exist. The idea of playing a supervillain like that is one that I find very appealing, but can easily run into the issues associated with anyone familiar with common comic book tropes (particularly classic villain mistakes) and seeking to avoid them; i.e. kill the hero when you have the chance with a gun to the head and never reveal your plans. The premise here is that those "mistakes" are the goal because you do not want to win. You just want to put on a good show. Maybe you do want to win against another supervillain that is, well, downright villainous. The last part is my little addition because it's not fun to always lose. 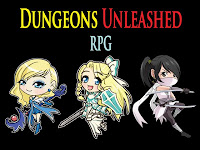 Dungeons Unleashed looks adorable. There is something about it that tickles my love of classic fantasy anime. Nice art in full color is appealing as well. It promises to be a rules light game with quick dungeon design. The project description also mentions 20 classes and custom character sheets for each class, as well as magic for each class to play with. For GMs is has monsters that can be leveled and some pre-made adventures.

I really wish that there was more information in the project description. The idea of a cute, rules light (though not old school) fantasy adventuring game is something that I often find myself wanting. Just to throw together some awesome fun for a few hours without much prep time. I'm really hoping that this will fill that niche nicely. It could use some backer support, but still has just under two months left. Give it a look!
Posted by Morgan Weeks at 02:42