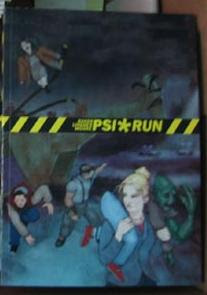 In Psi*Run you play a psychic with amnesia (also called a "runner") that has just escaped during a crash. While evading the chasers (the NPCs that will be chasing your runners) and coming to grips with your strange powers, you are trying to regain your memories because that is the only way you will be able to bring this to an end.

The system for this game is simple, easy to grasp and will largely propel the session on its own momentum. You'll just need a few printouts, 3x5 cards and a sharpie, some tokens and a pile of d6 (at least 6). The printouts that you will be using are character sheets, the risk sheet and the chasers sheet.

Each game will involve having the GM and the players decide what kind of themes you want to play with, both for your powers and whatever secrets will be associated with this run (e.g. power origins, government conspiracies, who you really are, etc.). This isn't expressly necessary, but this conversation really seems to focus everyone's attention and keeps things from diverging wildly. This is particularly true if two players are trying to tell very different stories, which can be awesome, or it can be messy and incoherent. That discussion will get everyone on board and significantly help direct character and chaser creation, which can be difficult for some given how open-ended it is, and there isn't much to help direct your thoughts.

Making a character starts with the character sheet. It has everything you're going to need on it from creation, throughout play and onto the endgame. The book, which is slender at 60 pages and a small shape (~8 x 6), does an excellent job of relating all of the creation steps through numerous examples throughout the text, often with completed examples in sidebars. To start you pick a name and apparent age, what your powers are, what you see when you look in the mirror and then choose your questions (these are what you explicitly do not know about yourself, but through answering them will tell your, perhaps others', and the game story).

The book suggests that you leave your powers (it is worth noting that psychic powers aren't a requirement and a group of fallen angels is just as supported as rogue psychics from Push) vague rather than specific and I agree. It keeps what exactly you are capable of a mystery to everyone, but a strong theme and some implications goes a long way; e.g. searing light that leaves me empty. What you see when you look in the mirror is a creative way of describing what you look like, perhaps with some interesting implications (e.g. I cannot help but stare at my eyes and wonder), consistent with how you will see yourself for the first time - what with the amnesia.

Answering your questions will be your ultimate goal, though odds are that you will not be the one giving the answers. It is really vital that your questions interest not only you, but everyone else in the group so that they have a stake in who you are. At least one should relate to your powers (e.g. why does my light leave me?), one should relate to your strengths and weaknesses (e.g. why can I never meet her eyes?), and at least one should relate to your immediate, past, or current circumstances (e.g. who is Deacon Priest?). Everyone will have the same number of questions (four to six), but not all questions need to be decided right away, besides the three aforementioned. The number of questions that each character has will heavily influence how long the game goes; the more questions, the longer the game. If you want a one-shot, I would strongly suggest that you have no more than four questions.

The GM will start by taking care of the chasers and filling out the chaser sheet. The chaser sheet is useful the first time and is really just a way to organize thoughts, but after that a sheet of paper with a nice blank area I have found to be more than sufficient. On the sheet you keep track of all of the public information about the chasers, their look (e.g. black suits and mirror shades), methods (e.g. ruthless efficiency) and powers (e.g. preternatural awareness). On one of your notecards, the chaser card, make some secret notes that keep with the themes from the chaser sheet and provides imagery, items, events, whatever to keep things moving forward and hangs things on (e.g. black basalt, no eyes, The Revelation Device, Dr. Cypher).

From here you are ready to get started, which means laying the first card in the trail, the crash! The trail are the locations the players have traveled to which the chasers will be following. Every player should have their own distinct token that will be used to show what location they are at, this is particularly important if players ever branch off. From here the system takes over and the first thing to remember is that no one gets to take two actions in a row. In fact, I prefer to have everyone take an action before someone gets to go again, it helps to ensure that everyone has a say and doesn't feel overshadowed. I crafted some tokens to keep track of just this from red and white poker chips. Every player begins at the crash! having just awakened with no memories, the inkling of strange power and questions. Oh yeah, and you're being chased.

This is the point where you begin to interact with the system. Whenever you want to take a significant action you roll some dice. A significant action is defined as one where something can go wrong, shows off how awesome you are (possibly at making things go horribly wrong, but that's for you do decide), could trigger a memory, takes time and focus, and/or might expose you to danger. The number of dice you roll is based on the number of true statements from the following: I'm exceptional, I want to do something important, this might trigger a memory, the chasers might catch up, I am using a psi power, and/or I am risking harm. The first four are always true and all of these are on your character sheet for easy reference. You start with four dice, but can have up to six. If you are using a psi power and/or are risking harm, things might go sideways more spectacularly, but you have more control over how your decisions are made. Here's an example of two risks:

Reveal:
Psi:
Once you've rolled your dice, you will place them on the risk sheet. The risk sheet is a handy reference that guides you through your decision making process based on what you rolled on your dice and the consequences for a given result on each risk (it may sound complicated, but it couldn't be more simple in practice). The risks that are always in play are goal (do you accomplish your goal?), reveal (do you remember anything?) and chase (do the chasers advance?). If you used psi and/or harm, then the psi;(do your powers cause trouble?)and harm (are you hurt?) risks are in play for that action as appropriate.

You may note that you are rolling more dice than you can place, which means you get to drop your lowest die. The exception to that is if you are hurt and impaired. If you are impaired you lose a die before you roll, so you have to place all of the dice. If you are doubly impaired (you've been hurt and impaired twice), you have to lose your highest die after your roll. That is pretty rough and means that things are going to be in a bad way very soon.

Each risk will also dictate who has first say over the events. Typically this is the active player or the GM, but not always. If the chasers ever catch up with a runner, different risks will be revealed instead of chase. It changes the tone of what is going on. 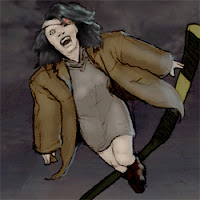 This is why it is important that your questions are interesting to not only you, but the other players as well. There is a good chance that they will be answering most of your questions for you. This really works for me as it builds a stake for each player in all of the other characters, so they are fans of that character and invested in their story, and through that tying all of the stories together. In practice, at least. Sometimes it can get messy, but that is where a brief discussion before getting started so that everyone is cribbing from the same notes can go a long way to creating something that is a little more coherent. That isn't going to work for everyone, naturally.

Once a player has answered all of their questions (if you didn't fill them all out during character creation, you will use reveals to ask new ones), that is when the endgame begins, called the Crossroads. The player that starts the Crossroads gets to pick from the available endings first: Home, turning the tables, on a quest, hidden, trapped, lost, or making a discovery. Then each player, moving from most to least answered questions, picks an ending; no one can have the same ending. From there the GM decides the order the endings play out and the players narrate how they play out. I like to write the each ending on a notecard and the order for them to play out on the back ahead of time; it gives the player that picked it an immediate cue to where their ending will be taking place in the overall sequence and they can begin planning accordingly. Sometimes a brief note to offer some more structure helps; e.g. "#1, you die in this one" on Turning the Tables and "#7, this is the happy ending" on Home.

My only real criticism for this game is with the Psi risk above. I've found that it has no mechanical teeth behind the consequences. All other risks clearly list the consequences for the decisions that you make, but all of those for Psi require some significant buy-in, and given the limited nature of the game not all players will have that. It often becomes a place to dump poor rolls so that avoiding chasers and harm are fairly straightforward. If you're playing conservatively and only gaining reveals when you can afford to, this becomes even more of a problem.

Another option that I found useful was to allow another runner to take the harm in place of the acting runner in exchange for first say in that action, including the GM say. This seems to get players more into a place of working together, willing to sacrifice for each other, and aware of the potential consequences of their risks. It also grants more opportunities for the players to take control of the narrative, but at a cost.

All summed, I think that this is a great little game. Four questions is an excellent number for a long evening and more will give multiple sessions to wrap everything up. I highly recommend this for some structured cooperative storytelling and really wrecking some major metropolitan area.
Posted by Morgan Weeks at 02:14