This is the fifteenth Adventure Log in an ongoing series about Earthdawn.Introduction and Index.

The Glenwood Deep presented here has been developed and tailored for this particular campaign and contains a number of details that wouldn't be considered canon. That being said, Glenwood Deep is forested region between the Scol Mountains and Serpent River in the Northeast of Barsaive. Near the t'skrang House Ishkarat and the city of Iopos on the Serpent, the windling tribes that call this region home struggle to maintain a fierce independence from those allied powers and any others (including nearby Blood Wood).

Within the largely unspoiled forests of Glenwood Deep reside most of the windlings in Barsaive, some would call it infested with them (both charitably and uncharitably). The various tribes within the woods are in a constant state of war with each other. This continual fighting may stem from old grudges to simple boredom, but never results in serious injury. It is simply a part of life within Glenwood Deep, but serves to keep all windlings (Windmasters in particular) prepared for combat against any that may invade their home. Given their significant disadvantages in size and frequently numbers, their practice with guerrilla tactics and traps against each other to gain any advantage they can serves as a strong deterrent.

While windlings are not the only Namegivers to call it home, very few non-windlings find life within the trees suitable. Mostly elves with the occasional human make a place for themselves there and generally that is within Owl City. The tribal nature has the advantages low impact to the forest and the ability prevent invaders from capturing homes, but makes trade with outsiders difficult and relationships with other political entities virtually impossible. Thus Owl City is the cultural center of Glenwood Deep and considered "base" for all ongoing tribal conflicts, and off-limits (though a well-played practical joke is always appreciated).

Constructed as a part of the forest, most of Owl City rises above the ground with walkways between the various trees. The ground is sized almost exclusively for larger Namegivers (with attention always paid to ensure that obsidimen feel welcome) - it exists primarily for their convenience, after all. It is from here that the Queen of Glenwood Deep tries to keep track of her flighty people. The ruler (Queen or King) is selected in a fashion that most windlings aren't entirely certain of - one simply appears and if they do a good enough job, no one has a problem. 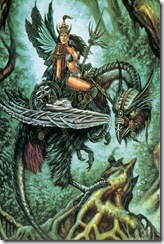 The other permanent structure within Glenwood Deep is the secret location where Windmasters learn their Discipline: Raccoon City. It is absolutely forbidden for any non-windling to ever learn its location and very few non-Windmasters ever know beyond rumors. It is from here that the primary defense for Glenwood Deep trains and shares any new tactical developments. The leader of Raccoon City and the Windmasters is the Warmaster of Glenwood Deep. They are elected from the corps of Windmasters by their peers and typically serve for life. The current Warmaster has also taken the position of Queen - a combination that is convenient with the additional authority it gives to the figurehead of the windling "state", but also because the rest of her people are terrified of telling her no.

Recorded By: Sogun of Ayodhya

We’ve set sail on an airship named Dreams of Chorrolis to Glenwood Deep(1). By my calculation, we should be there in five days. The things that fly in the skies are the things of nightmares. Beast of air with a wingspan of more than 40 feet that are more teeth than beast.

We finally dock in a small frontier town, more of a trading post than anything else. We bed down in a cheaper inn for the night. A group of troll cavalry are massing in the North. I met a man with boots that allow him to travel 100 miles a day.

We reach the second half of our journey. We find ourselves on a riverboat that the mere mention of Ting would get us thrown overboard. Our westward journey is a longer one than I would have thought, and sees as it’s about to get longer. We seem to have stumbled across a village that has been impaled on spikes. This looks like scorchers. The act of impaling live people is a common practice of their people(2).


We finally come upon Glenwood Deep. It is a rather nice change from our recent somber events. Our greeting in Glenwood Deep was a little more uneasy than I thought(3). After some awkward tension we are lead to Owl City(4). The city is riddled with traps. The whole city is built into the trees.

As a true adventuring group we hit up the bar the first chance we get. We partake of a very sweet wine known as keesris(5), brewed from the keesry berries. It’s a little more than a simple syrup with about 2% alcohol. We had to get a barley wine in order to get a proper drunk going.

We dance! Well, I try to dance, but ended up breaking things.

We get our morning breakfast “sugar” and then head to work.

Jak works the forge for some time before Jak is sent out to gather metal from metal plants. During a second trip through the metal forest to mine crystal, we encounter bears riding bears(6). I’m not making this shit up, there were bears that were riding bears! We manage to bring the bears and the windlings to an understanding. Then, after we drop off the crystal, we party with the bears and windlings. I share maps with the bears(7).

The next day we return to the somber overtone that we started with. Firefly, the Weaponsmith training Jak, died today(8). It was a sad day. After sending the bear people South, we head back to Throal.(9)

(1) That place is absolutely infested with windlings.
(2) Also common to House Ishkarat - both scorchers and the t'skrang blame it on each other, but I think Iopans introduced them both to the practice.
(3) Windlings are uneasy around outsiders.
(4) The "capital" of the windlings.
(5) Ugh, that stuff is foul.
(6) What? This doesn't make any sense.
(7) Something important is missing from this story.
(8) If that is the Firefly then this is more than a sad day. This is a tragedy for the province. He was truly a decent Namegiver and beloved by everyone who had the fortune of meeting him. Especially since he died so young. Everyone should read some of his Adventure Logs, "Four Fathers".
(9) Received and edited by Ela Pono

Narratively, I think this is one of the best sessions of the campaign. While there wasn't any real action in it, it worked in all the right places and had excellent pacing. There was tension in a number of areas, wonderment, getting to know and care about someone, and then a distinct feeling of loss. The log itself has left a considerable amount out, but part of their activities involved aiding Firefly, the windling Weaponsmith, by gathering metal and crystal for to use in completing his Heartblade. He died the following morning, the weapon bundled up, noting that it was for the Queen, and his apron left for his recent apprentice, Jak. The series of events leading up to that moment were rather touching and affected the table as they realized he was gone just as he had accomplished his life's goal. The full extent of this would only be revealed later, and even then not yet in its entirety.

This session also introduced the urshan, indeed as noted in the log: bears that ride bears (urgarlshan). They were created to make the world bigger than just the province and introduced to create an element that will keep things unstable. The host that the players encountered were scouts ahead of the main body, refugees looking for a new home. No matter where they settle within the province, they are going to cause problems. This is effectively a new nation that is coming to settle and despite their peaceful intentions, they are more than willing to fight for a place. The more disturbing questions that have started to arise are: what exactly are the running from? They will only say the vulfaider, but what that is, it is still a mystery.

The journey to the Scol Mountains, both with and without Firefly (the latter for Jak to retrieve the material to craft his item involved in gaining a Circle), had some tension in it. It was a good series of scenes, showcasing some of the more alien changes that the Horrors wrought on the land; both terrible and beautiful in its own way. They found evidence of changelings in the area, windlings twisted by the Horrors that are now compelled to shape bones into art. But they went out specifically searching for trees - the steel magnolias. Trees that absorbed minerals from the ground and turned them into flowers of metal that can then be easily collected and forged. Meant to be a cruel joke by turning something beautiful into something deadly (those petals are sharp!), they are still beautiful, but chilling as the wind rustles the leaves and flowers, causing alternating tinkling and screeching sounds.

On their return, narrowly avoiding cave trolls, the players encountered the urshan and that almost went sideways a number of times (failed Etiquette and Speak Language rolls resulted in someone trying to buy one of their children instead of a mount - oops). The ending had the excitement of power-brokering an arrangement between the urshan and the Queen, which still has consequences in the campaign. That excitement was tempered in the end with the death of Firefly - it was bittersweet for everyone.

I wanted to explore some different themes in this session, as well as introduce some new elements of the metaplot. It was about juxtaposition - joy and sorrow, beauty and horror, fear and triumph, victory and loss. Never intended to be the most exciting adventure ever, it was intended to have some long term consequences, to sow seeds to reap at a later date. There are still some moments in this session that are talked about, and others that are studiously avoided. Even if only present for a short time, he was something of a father figure for those present. In some ways, more than they could possibly have realized.
Posted by Morgan Weeks at 01:42