This is the fifth Anatomy of a Thread Item in an ongoing series about Earthdawn. Introduction and Index.

If you happen to be a player in this game, please do not read this series. There will be spoilers and some of this information is subject to change.

This Thread Item is the companion to a Thread Item I wrote about previously, Ebony. While the entire plot that connected these two items fell out from under me, this had been introduced into the game by then. Luckily, it is generic enough to be good for nearly any character. Even more than that, however, it is particularly good for the new character. The story, however, may need some changing on the back end to tie it back in to the game as a whole.

Since much of the story behind this item has already been related, I'm going to take this opportunity to break down how I came up with the various elements for this Thread Item at each step. First, the overall themes: while Ebony was a monster, this is a more delicate instrument. It is smooth and sleek where the counterpart is rough and massive. Instead of a blunt instrument of brutality, this offers more subtle protection and allows to adapt to more situations. It was designed to be worn on the off-hand by a Swordmaster, taking advantage of their Talents (as House-Ruled for this campaign) and general fighting style. In particular, the need to have a weapon in their off-hand. 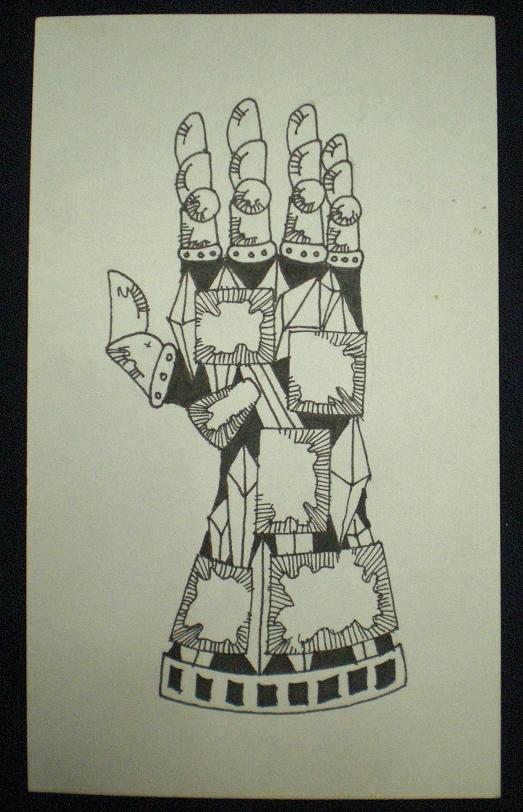 The gauntlet is a sleek affair of black steel and living crystal. Constructed of small plates and smooth surfaces, the crystal appears asymmetrically from under the metal as though musculature.

Everything here is pretty standard - the maximum Threads is low because of the Blood Sworn Deed at Rank Seven. It only makes sense for there to be only one wearer with such a restrictive requirement. I wanted the description to convey that this appears like living armor, an extension of their skin rather than simply a gauntlet.

Key Knowledge: The wielder must learn the gauntlet’s Name.
Effect: The wearer gains +1 to Physical Armor, +2 to Mystic Armor and a +1/+1 Deflection bonus. If used as a melee weapon the gauntlet has a Damage Step of 2 and is considered an attached weapon. The gauntlet will provide no armor or deflection bonuses if used with a shield.

The Rank One effect is effectively a crystal buckler. Normally they would have +2 Physical Armor and -1 Initiative, but I applied the Smooth Armor Knack and eliminated the initiative penalty. This goes into the effects of it being a second skin. All of this is standard for a Rank One effect. The damage is not good, but it hardly matters - for the intended recipients I doubt it will ever see use. The important feature here is that it can be used with a weapon, but not another shield. This encourages Swordmasters, but prevents some abusive defensive stacking. On the whole, this is powerful for a Rank One effect, but it is a Warden tier item and a beefed up crystal buckler is incredibly lackluster here.

Thread Rank Two
Effect: The wearer gains a +1 rank bonus to the Second Weapon Talent (only if the weapon is held with Ivory).

This effect is completely in line with the appropriate bonuses: +1 to a Talent. This particular Talent hits home with the heightened usefulness for Swordmasters, while limiting the value for two-handed weapon users. The restriction seems strange, but a t'skrang can use Second Weapon with their tail combat racial ability. That isn't something this particular Thread Item is intended to support.

Thread Rank Three
Key Knowledge: The wielder must learn the Name of the gauntlet's first wearer.
Effect: The wearer gains a +1 rank bonus to the Avoid Blow Talent.

The Key Knowledge thus far have been standard, and that is perfectly fine for these purposes. If I play with them too much, it can at times become a burden to keep them constantly different and it makes the Key Knowledge that I want to stand out just become part of the noise. The Rank Three effect is standard as well, +1 to a Talent. With my House Rules, that replaces Parry, and plays into the defensive nature. Instead of granting a bonus to armor or Physical Defense, I wanted to emphasize the active defenses and the fluid nature of the Thread Item. Also, it plays into the effect at Rank Four below.

Thread Rank Four
Effect: The wearer gains the Dazzling Parry ability. For 1 Strain, if the wearer has not made a Second Weapon Test during this round, they may give up that opportunity and apply their Second Weapon Rank as a bonus to an Avoid Blow Test. This ability may be used once per round.

Here, there is value for anyone with the Avoid Blow Talent, since Ivory already grants you the Second Weapon Talent. I always prefer to give the Talents up front that will be required later on for some big effect that I want to throw in, and I almost always want to throw in an effect that isn't just more bonuses. In my experience, even an effect that isn't powerful will make a Thread Item significantly more interesting than just a pile of bonuses. By the same token, too many effects can dilute the flavor of the Thread Item and complicate things (giving players too many options can have a downside, not the least of which is forgetting they exist).

This particular effect builds on the defensive nature of the gauntlet and grants some versatility in how the character approaches combat. Useful, but not extremely powerful - it just allows the character an extremely good defense each round, particularly if they are holding back on offense for whatever reason. It is particularly good when using the Maneuver Talent.

Thread Rank Five
Key Knowledge:  The wearer must learn and visit the mines which provided the iron and living crystal used to craft the gauntlet.
Effect: The wearer gains +2 to Physical Armor and +1 to Spell Defense.

At Rank Five is when I prefer to have Key Knowledge really start to require some work and investment. This is not going to be something easy to learn, as it is probably in the Twilight Peaks - if it's not, that will make it even more obscure. For Thread Items that were clearly crafted, rather than Legendary, the Key Knowledge shouldn't relate to things that were done with it, but more around the genesis of the Thread Item. That isn't to say that Legendary Ranks cannot be added later, but they should be at the end of the Thread Ranks.

Rank Five is also when I increase the power of the bonuses based on the tier of the Thread Item. For a Warden Item, like this one, that means handing out two different bonuses. The expense of getting this Thread Rank is going to be considerable (2100 Legend Points) and I want it to feel like it is worth it, not to mention the effort required to get it. There are two standard bonuses, +1 to Physical Armor and +1 to Spell Defense. Again, this is a protective item and I want that to be front and center, but with the living crystal I wanted to ensure it offered mystic and physical protection.

Thread Rank Seven
Key Knowledge: The wearer must learn the fate of the first wearer.
Deed: The wearer must be Blood Sworn to the wearer of Ebony.
Effect: If the wearer successfully uses Dazzling Parry, they may apply the Test Result as an attack against the attacker’s Spell Defense. On a Good Result or better, the attacker suffers a penalty to their Initiative next round equal to the Thread Rank.

The Key Knowledge isn't the restriction at this Thread Rank, but the Deed. Not many characters will fulfill that requirement. This is also a Thread Rank where the bonuses tend to go up again. For Warden tier that doesn't mean three bonuses, but I like to introduce effects that improve or build on the primary effect of the Thread Item which may be a bit on the powerful side. By now, the player has gotten used to what the Thread Item can do, so changing that up a little keeps it fresh.

Going back to the themes of adapting and versatility, this gives some additional benefit to the Dazzling Parry effect. It may not be something that the character can capitalize on, but definitely something that will benefit the Group as a whole. Which is another aspect that I like to include in Thread Items, effects that will benefit everyone. They tend to get the other players more interested in what is going on with this character and their gear if they stand to benefit from it. This also plays with the Riposte Talent a little - offering a different kind of outcome, which may be better depending on the situation.

Thread Rank Eight
Effect: The wearer gains +3 to Physical Armor and a +2/+2 Deflection bonus. Additionally, Dazzling Parry may be used a second time each round. If Dazzling Parry is used successfully on the same target twice in a round, the penalties do not stack.

For the final effect, I went big. From here on out, improving this Thread Item is up to the character and their Legend. The Physical Armor is now equal to the Mystic Armor, which I like in terms of symmetry. Also, the Deflection bonus went up, which is like a bonus to Avoid Blow, but a little more limited. The additional use of Dazzling Parry is nice, but you still have to give up your Second Weapon attack to use it in the first place and you cannot stack the penalties. So there are three different bonuses, but overall I don't think they are too much for this Thread Rank given some of the inherent limitations.
Posted by Morgan Weeks at 02:36